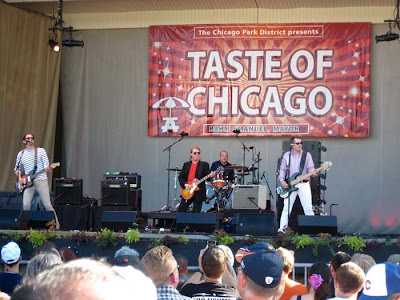 Photo by my wife Pam. (Click to see larger image.)

Material Re-Issue, the trio formed to commemorate the 20th anniversary of the release of International Pop Overthrow, continues to impress in its sporadic live gigs. With original members, drummer Mike Zelenko and bassist Ted Ansani, joined by singer-guitarist Phil Angotti, Material Re-Issue played at Fitzgerald’s and The Abbey Pub last April. They performed an hour-long set at the Petrillo Bandshell in Grant Park late yesterday afternoon as part of Taste Of Chicago.

Unlike their sold-out International Pop Overthrow show at The Abbey Pub, Material Re-Issue didn’t play their debut album from start to finish at yesterday’s sun-drenched concert. They did choose at least seven songs from IPO, with the hits “Renee Remains The Same” and “Diane” coming early on in the set, but mixed them in with deep cuts from the Material Issue catalog. Guitarist Jay O’Rourke, from one of Chicago’s other stellar power pop bands, The Insiders, helped out on several songs, while Angotti and Ansani consistently crafted first rate harmonies.

The eclectic set, which included the rarity, “Sixteen Tambourines,” proved once again that the late Jim Ellison was a highly gifted songwriter as well as a charismatic frontman. Lighter, melodic fare like “Carousel” and “Everything” was balanced with the hard-hitting "What Girls Want" and “Echo Beach,” which gained an almost progressive rock feel through O’Rourke and Angotti’s guitar playing.

“Valerie Loves Me,” the song that broke Material Issue on MTV and across the country back in 1991, was saved for almost the very end. Angotti delivered the funny lines on “Goin' Through Your Purse” with a distinctive yelp while the band played at a rollicking pace. Material Re-Issue closed with their exotic cover of “Kim The Waitress,” (originally done by The Green Pajamas) with O’Rourke wielding what looked like an electric sitar.

The trio has upcoming gigs on July 8th at SummerFest in Milwaukee and at Chicago’s Lincoln Hall on September 17th.