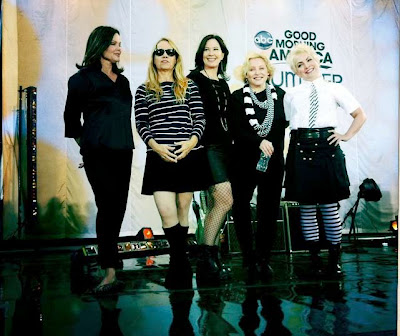 Ravinia Park was literally a cool place this past Friday night, as a below average temperature greeted an audience that had come for a double bill of 1980s rock. Luckily, The B-52’s and The Go-Go’s knew what to do to save the party. Although it has been at least 30 years since both of these groundbreaking acts made their debuts, they thoroughly entertained their fans at Ravinia with a number of big hits.

The B-52’s came on first, with original members Kate Pierson, Fred Schneider, Cindy Wilson, and Keith Strickland joined by longtime backup musicians Paul Gordon on keyboards, Tracy Wormworth on bass, and Sterling Campbell on drums. I was surprised by how much of the band’s material I was unfamiliar with, and even the people in the designated dance section in front of the stage seemed less animated during these songs. Still, everything was energetically rendered, with Wormworth and Campbell providing a steady, irresistible backbeat.

“Private Idaho” and “Give Me Back My Man” from 1980’s Wild Planet came early in the set and were well received, but “Roam,” from the 1989 release, Cosmic Thing was the first song to really get everyone up and grooving. “Party Out Of Bounds,” also from Wild Planet, was a blast, with Schneider giving lines like, “Disgusting things you’d never anticipate!” a theatrical flair. The B-52’s closed with a rousing rendition of “Love Shack,” which left a roaring audience demanding more.

The two encores came from the band's self-titled debut; the first being an extended and playfully spooky take on “Planet Claire” that was worth the price of admission alone. Pierson trilled along with the synthesizer while Schneider traveled the entire stage doing a robot walk. “Rock Lobster,” the impossibly silly new wave hit that first caught the attention of so many people back in 1979, served as the perfect finale for a concert that found The B-52’s still bringing the fun.

Seeing The Go-Go’s onstage again was a welcome development after the 2010 Farewell Tour was canceled due to an injury to guitarist Jane Wiedlin. This time out, there has been no talk of retiring, and all five original members look like they’re glad to be back. Lead vocalist Belinda Carlisle belted out the clever lyrics of “Skidmarks On My Heart,” one of several songs performed from The Go-Go’s debut, Beauty And The Beat, which was recently released in a two-disc 30th Anniversary Edition. The harmonies and vocal interplay were first rate on “How Much More,” “Fading Fast,” and the punkish “This Town” and “Tonite.”

The band opened with the title track from Vacation, and also picked “Get Up And Go” from that 1982 effort. There was a nod to Carlisle’s solo career with “Mad About You,” as well as Wiedlin’s collaboration with Sparks, “Cool Places.” It could have been my imagination, but it looked like Caffey was imitating Sparks goofball Ron Mael’s unique facial expressions while she played the keyboards on that song. A rollicking cover of The Stones’ “19th Nervous Breakdown” was a pleasant surprise, and The Go-Go’s went deep into their catalog for “Unforgiven,” from the solid but sadly overlooked 2001 comeback effort, God Bless The Go-Go’s, and “The Whole World Lost Its Head,” which can only be found on the Valley Of The Go-Go’s compilation.

The chart-topping single “Our Lips Are Sealed,” which surprisingly wasn’t saved for an encore, had everyone dancing and singing along, and The Go-Go’s closed with the exuberant “We Got The Beat.” Unfortunately, my wife and I missed the encore because we have to leave to catch two trains back to Palatine.