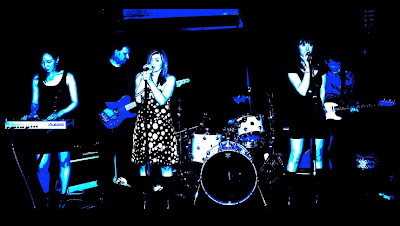 Vocalists Erica Loftus and Michelle Tormey of The Right Tidys create playful harmonies on catchy rock tunes, backed by a band that includes bassist-back-up vocalist Lou Galassini of Van Go. (Van Go has the honor of being this year’s final act.) “Rippin’ Me Off” has a garage rock feel similar to what the French four-woman band The Plastiscines are up to these days, while on “Set The Hook” the band takes a sensual new wave approach.

With melodic gems like “Turn Off The Night” and “Take It Out On Me,” it’s no wonder singer-guitarist Lannie Flowers has generated a buzz across the power pop blogosphere. The native Texan will likely be playing tunes off his critically-acclaimed latest CD, Circles.

The name Superbig could be referring to commercial aspirations, but it also applies to the band’s approach to power pop. The melodic but expansive “Way We Were” and “Run Me Over” sound radio-ready, and Superbig adds strings to the emotional “Giving Up On You.”

The Love Shots rough up 1960s style arrangements with raw vocals and guitars in a manner reminiscent of The Clash. The trio actually crafts some sweet harmonies, which add to the allure of catchy songs like the brash “Shutterbug” and the mid-tempo “Banshee.” They’ve just released a six-song EP.

Led by Chicago music scene veteran Tim Ferguson, neo-psychedelic rockers Red Plastic Buddha will close out Wednesday night’s showcase with a series of long form musical trips from their Sunflower Sessions CD. The video for “Forget Me Not” which can be seen on the band’s MySpace page, perfectly captures the Red Plastic Buddha vibe.