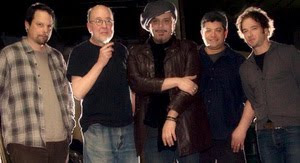 Golde Record. There’s always a lot to do in the Chicago area, but this weekend will be particularly busy. Saturday is Record Store Day, which not only means loads of vinyl treasures to sort through, but also some interesting in-store performances. For example, Candy Golde, a new band comprised of Nicholas Tremulis, Bun E. Carlos of Cheap Trick, John Stirratt from Wilco and The Autumn Defense, Rick Rizzo of 11th Dream Day, and Mark Greenberg of 11th Dream Day and Cocktails, has gigs at Laurie’s Planet Of Sound on Lincoln Avenue at 1:00 PM, and at the Reckless Records store on Milwaukee Avenue at 3:00 PM. The band’s self-titled five-song debut, which includes a cover of Paul Simon’s “Boy In The Bubble,” will be released on May10th. They have a gig at the Double Door on April 29th.

Since I don’t have enough time or space to describe all of them, I’ll just list the line-ups for tomorrow’s gigs, with the artists I’m familiar with and would recommend, in bold type. The others acts are ones that I’m not familiar with, or couldn’t find on the web. The daytime showcase features Missing The Point, AM: PM, Freetoed, The Injured Parties, They All Have Legs, and Cyclesomething. Later in the evening, also at The Abbey, there will be performances by Julia Klee, Audrey Ryan, Rabbit Children, Graham Elvis, Million Yen, Colin Gowel & The Lonely Bones, and Kaiserkeller. Actually, I’ve never seen Kaiserkeller, but I’ve been hearing good things about their 1960s style power pop.

I’ll try to post a preview of Sunday’s lineups tomorrow, but in case I don’t, here’s a heads up: Pretty much the entire schedule at The Abbey, starting with 92 Degrees, will delight power pop fans, and the showcase at Red Line Tap, particularly Pop Dollys, The Hurtin Kind, and The Wanton Looks, is also one of the festival’s best.

Reeling In The Years. The people at The Second Disc have more news about the Hollies CD boxed set titled The Clarke, Hicks, & Nash Years, which is being released on May 9th in the U.K., and a short time later Stateside. Subtitled The Complete Hollies: April 1963 - October 1968, this set will have ten previously unreleased tracks, including seven live songs from a 1968 concert in London. The other three newcomers are tracks that were recorded in French. According to The Second Disc, the 159-track The Clarke, Hicks, & Nash Years will sell for 17.93 pounds, or 29.50 in American cash, although Amazon currently lists it for pre-order at $49.12.

Harmonious War. Round Two of The Peace Fest Battle Of The Bands takes place tonight at Silvie’s Lounge, with Root Cause, The Hidden Dangers, Mama Dempsey, Sam Gray, Mark Hetzel, and Moon Cat involved in the musical fray. Silvie’s Lounge is located at 1902 W. Irving in Chicago. The winner of the competition will secure a time slot at Peace Fest 2011, which will be held on the weekend of June 17th through 19th at 1700 Stockton Drive in Chicago.

It’s All Right Ma, I’m Only Aging. Black Forest had success with its John Lennon birthday bash last October, and now the theatre group is planning on lighting 70 candles for legendary troubadour Bob Dylan on May 21st at Cafe Mozart in Evanston. As with the Lennon tribute, BF founders James Moeller and Carla Hayden aim to present a variety of musical acts. So far, they’ve lined up musicians Chris Bock, John Dalton, Mr. Mo, Joe Lapsley, and Tim Duggan. Hayden plans to tackle “Positively 4th Street” and “Masters Of War,” while Moeller will do “Cold Iron Bounds,” “Love Sick,” and “Knocking On Heaven’s Door.” Tina Teske, from the Famous In The Future comedy group, is slated to sing “Forever Young.” Bob Dylan’s Birthday Bash! will run from 6:00 to 8:00 PM. Cafe Mozart is located at 600 Davis Street. This might be the only tribute concert where even I could sing better than the artist being honored. Just kidding, Mr. Zimmerman.

Kuehnert Is A Punk Rocker. Stephanie Kuehnert, author of the rock and roll fueled novels I Wanna Be Your Joey Ramone and Ballads of Suburbia, will be conducting a one-night class titled Digging Into Character at StoryStudio on Chicago’s north side this May 17th from 6:30 to 9:30 PM. The author will be discussing character development and setting, as well as methods for finding an agent and getting published. The fee for the class is $50 for non-members, $45 for members.

What If All The Good Times Came Back? Rolling Stone writer Andy Greene states that Ray Davies told the magazine in a recent interview that he’ll be chatting with bro Dave next week about the possibility of a Kinks reunion.

S.P.A.C.E. Cowboys. Alt-rock/Country band Dolly Varden has a show coming up with the similarly inclined Anna Fermin’s Trigger Gospel at S.P.A.C.E. in Evanston on April 23rd.