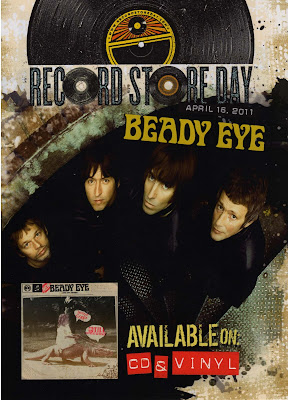 I had intended to post this piece over a week ago, but my obsession with International Pop Overthrow - Chicago got in the way.

My wife Pam and I have a running joke about when one of us has to admit to being wrong. It’s based on an episode of Happy Days where the usually self-assured Fonz is faced with such a situation, and is unable to fully articulate his guilt. So what he says sounds like, “I was wrrrrrrrrrrr” instead of a simple “I was wrong.”

So, I was wrrrrrrrrrrr about this year’s Record Store Day. When Pam asked if I wanted to get up early that Saturday morning in order to be one of the first customers clamoring for the vinyl rarities at Top 5 Records in Palatine, I assured her there was no need to do that. It was a new store in a sleepy suburb, and most people weren’t even aware of its existence.

It was almost 11:00 AM when I arrived at Top 5 Records, which currently occupies a space in The Wolff's Flea Market at 1775 N. Rand Road. Store owner Alan Brostoff hopes to move into a permanent location in the near future. One of his employees told me their supply of Record Store Day treasures had been pretty much wiped out within minutes of opening. The R.E.M. boxed singles set from their latest release, Collapse Into Now, the Foo Fighters Medium Rare covers album, and several other items were already gone. As it turned out, they never did get the dB’s “Picture Sleeve” 45 that was at the top of my wish list.

Brostoff told me that he had checked around the area, and found similar situations among his competitors. Records had quickly sold out and there were rumors that some of them were already showing up on eBay. No one had received the Daft Punk 10” Translucence, and apparently one location didn’t get any Record Store Day merchandise at all. Still, Brostoff felt that the success of Record Store Day should help Top 5 Records get its feet on the ground. And what was good news for him was good news for independent record stores everywhere.

Brostoff made sure I received one of the bags of free items his store was giving out for the occasion, which included a Top 5 Records t shirt; a pack of Soundgarden buttons; a Record Store Day magazine with Beady Eye on the cover; a limited edition Select-O-Hits sampler of artists like James Taylor, Dennis Diken from The Smithereens, and Heather Myles; plus Sub Pop Terminal Sales Vol. 4, which featured Fleet Foxes, Low, J Mascis, Dum Dum Girls, and other cutting-edges acts. Not a bad haul considering I had been so wrrrrrrrrrrr.

Coming up: Riding the rails to Reckless Records.