Party Lights - I See The Lights 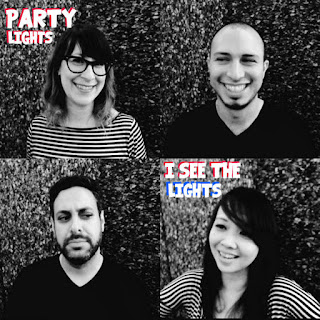 I See The Lights is the full-length debut from Party Lights, following a few singles and a self-titled EP in 2012. The Brooklyn-based quartet makes good on its sworn allegiance to The Go-Gos via singer-guitarist Anna Blumenthal's effervescent songs and the vocal interplay she creates with bassist-keyboards player Joan Chew. Guitarist Elliott Klein and Dave Smilow also play prominent roles in the band's successful power pop approach.

The catchy "Breakup #4, a carryover from the EP, is a prime example of how much Party Lights learned from the way The Go-Go's mix new wave with the 1960s girl group sound. "You Can't Tell Your Heart What To Do" follows in that same vein, with Chew's bass playing adding to the song's appeal. Most of these guitar-driven songs deal with relationships, from the sexy "Desire Always Takes A Toll" to the unrequited love of "A Boy Like You."

Although Blumenthal doesn't mention singer-songwriter Palmyra Delran as an influence, she exhibits a similar lack of sympathy for friends who stay in abusive relationships or wallow in self pity. On "He's Gonna Hurt You," she decides, "I'm gonna turn my back/Let you make your own mistakes," while on "Crybaby," she warns, "You can't cry your eyes out on me." That may sound harsh, but like all the songs on I See The Lights, it's set to an irresistible arrangement.
Posted by Terry Flamm at 3:42 PM