Posts Of Christmas Past 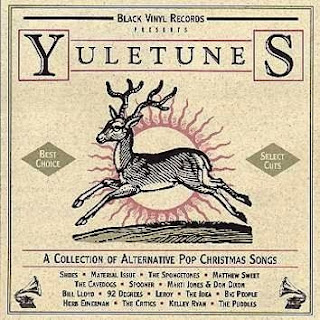 Here are some thumbnail descriptions of seasonal albums that were fully reviewed on Broken Hearted Toy in previous years. If your family is like mine and is celebrating Christmas after the actual day in order to ensure everyone will be there, then you still have time to use some of these songs to set an appropriately festive mood.

Released in 2002, Hi-Fi Christmas Party was put together by vocalist-bassist Dan Pavelich to help fund research for Von Willibrand’s disease, a bleeding disorder that had stricken his daughter. This easy-going holiday compilation included contributions from several local and national power pop acts. Pavelich led his band The Bradburys through the romantic and highly energetic “I Love It When It Snows!” Other artists involved with this worthy effort included Don Dixon, The Jellybricks, Andrea Perry, The Ted Ansani Trio, Lisa Mychols, and The Spongetones.

Hi-Fi Christmas Party Volume Three followed in the amiable tradition of its two predecessors, with another selection of mostly original material. Sketch Middle’s “Very Very, Merry Merry” had an energetic power pop buzz, and The Jigsaw Seen’s “What About Christmas?” was another highlight. The Click Beetles, a Pavelich side project with drummer Ed James; The Yule Logs; The Sun Kings; Jamie and Steve from The Spongetones; and Jim Babjak of The Smithereens also contributed catchy holiday tunes.

In 2007, The Smithereens brought their power pop approach to a mix of originals and cover versions on Christmas With The Smithereens. “Waking Up On Christmas Morning,” which can also be found on the Hi-Fi Christmas Party and Ho Ho Spice collections, is a catchy tune penned by guitarist Jim Babjak. The fast-paced “Christmas Time All Over The World,” written by Babjak, singer Pat DiNizio, drummer Dennis Diken, and original bassist Mike Mesaros, celebrates hugging and kissing under the mistletoe, and compares the holiday to a big rock show.

Yuletunes, an ambitious collection of original Christmas songs created by various power pop artists, came out in 1991 on Shoes’ Black Vinyl label. In addition to the shimmering “This Christmas” by Shoes, the classic collection included Matthew Sweet's reverent “Baby Jesus,” Material Issue's powerful "Merry Christmas Will Do," The Idea's wistful "It's About That Time," and the more introspective "A God Of My Own" by 92 Degrees. Leroy offered the comedic "Santa Stole My Baby," Kelly Ryan captured the heartache of missing someone on the holiday with "It's Not Christmas," and Herb Eimerman celebrated family traditions with "You Gave Me."

Most of the bands on A Kool Kat Kristmas Volume Two took a cheerful approach to the holiday, even when it comes under unusual circumstances. As with Volume One, a portion of the proceeds for each sale went to the Susan Giblin Foundation For Animal Wellness and Welfare. “Christmas Is Coming Again” by The Pencils (who reunited for this effort) and “Snowbirds” by The Honeymoon Stallions celebrated holiday traditions, using lush harmony vocals and ringing guitars. The Connection used playful, old time music on “Poor Boy” while proclaiming that you don’t needs loads of money to enjoy Christmas as long as you’ve got rock and roll. Shake Some Action and The Tor Guides adroitly employed mid-1960s jangle for songs about observing the Yuletide in non-freezing weather and getting cool records as gifts on “Christmas In The Sun” and “Beatles Vinyl,” respectively. Other acts on board included Split Second, Dan Kibler, The Bottle Kids, and The Genuine Fakes.

Back in 1993, Christmas Time with Chris Stamey And Friends had the feel of an old-fashioned variety show. Chris Stamey, a founding member of The dB’s, played host, and kicked things off with the catchy “Christmas Time.” Stamey also teamed up with vocalist-guitarist Wes Lachot for the wistful “Christmas Is The Only Time (I Think Of You)” and joined vocalist-keyboards player Cathy Harrington on the high-charged romance of “You’re What I Want For Christmas.” Big Star checked in with an original rocking hymn called “Jesus Christ,” and founder Alex Chilton offered a positively cozy acoustic version of “The Christmas Song.” Vocalist-guitarist Peter Holsapple of The dB’s served up a simple but beautiful “O Holy Night.” Brent and Kristen Lambert, Syd Straw, The dB's, Don Dixon, and Marshall Crenshaw also took part in the this rock and roll Christmas classic, which has been expanded a few times over the years.

Guitarist/actor/radio show host Little Steven Van Zandt morphed into a crazed Santa for the ambitious 2008 holiday compilation Christmas A Go Go. He threw in some genuine rarities, like a surf rock reinvention of “Santa Claus Is Coming To Town,” delivered by 1950s kids show host, Soupy Sales and actor Joe Pesci's wiseguy treatment of Gene Autry’s “If It Doesn’t Snow On Christmas." The Boss Martians gave Charles Dickens a spin with their high speed rock song, “3 Ghosts (A Modern X-mas Carol),” and The Electric Prunes created a psychedelic and slightly unsettling version of “Jingle Bells.” Other highlights included The Kinks' funny but ultimately goodhearted "Father Christmas" and Keith Richards romping through Chuck Berry's "Run Rudolph Run." Darlene Love's "All Alone On Christmas" (written by Van Zandt and featuring him and The E Street Band), and Tina Sugandh’s “White Christmas,” with its gorgeous vocals and exotic sitars and tablas arrangement, were also standout tracks.
Posted by Terry Flamm at 8:49 PM