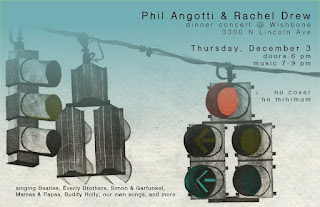 Some worthy events coming up in the next few days.

Singer-guitarist Phil Angotti, who is well known in Chicago for the tribute shows he does around town, will be joining singer-songwriter Rachel Drew from the Rachel Drew And the Bitter Roots band for an evening of cover tunes and originals tomorrow night, December 3 at the Wishbone restaurant on Lincoln Avenue. They'll be performing music by The Beatles, Everly Brothers, Simon and Garfunkel, Mamas and Papas, and Buddy Holly. Angotti's most recent CDs find him taking a more introspective approach to rock while maintaining his knack for strong melodies. Drew is currently working on her first album, with help from Steve Dawson of Dolly Varden; John Mead; Alton Smith; and Gerald Dowd. The show starts tomorrow night at starting at 7:00 PM.

Vaudevileins, a Chicago-based indie rock band that formed in 2010, has a new EP Transmission  available for pre-order on its Bandcamp page. That's also where you can stream the hard-hitting but melodic first single "Chasing Time" and download it for a buck. A Transmission release party is coming this up Friday, November 4 at Quenchers Saloon in Chicago. The $8 admission also includes performances by Veseria, Corral, and Light Aircraft On Fire. Doors open at 9:00 PM.

The opening reception for the unconventional exhibition Skimption will be held at the Ukrainian Institute Of Modern Art this Friday, December 4 at 6:00 PM. Artist/art critic (and my editor when I wrote for Chicago Art Machine) Robin Dluzen will be the curator. Skimption, which features artists Diana Gabriel, Emily Hermant, Luis Sahagun, Catherine Schwalbe, and Rusty Shackleford, runs through January 31. The Ukrainian Institute Of Modern Art is located at 2320 W. Chicago Avenue.
Posted by Terry Flamm at 3:35 PM