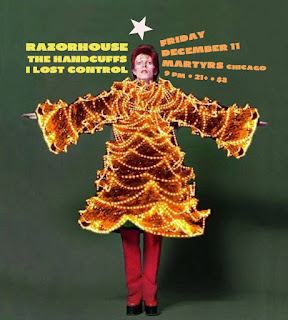 On Friday, December 11, there will be a triple bill of Razorhouse, The Handcuffs, and I Lost Control at Martyrs'. Earlier in the week, Rolling Stones fans can drop by the same club on Wednesday to see the tribute musicians collective Great Moments In Vinyl presents Let It Bleed and Sticky Fingers.


EXPOse yourself to fun. One of the coolest things you can do in my sleepy town of Palatine is watch EXPO '76 perform at Mac's On Slade. The eclectic covers band will be doing just that tonight. Mac's is a small joint and EXPO '76 has a large following, so you can see why it would be wise to get there early. Mac's also serves food.

Chicago-based indie rock band Vaudevileins has a new EP Transmission available for pre-order on the its Bandcamp page. That's also where you can stream the hard-hitting but melodic first single "Chasing Time" and download it for a buck. The release party, with Veseria, Corral, and Light Aircraft On Fire, was last night at Quenchers Saloon.

An article by Garrett White on Rolling Stone's website details how Graham Nash coordinated with Rock And Roll Hall Of Fame Museum curator Karen Herman in setting up the new Touching The Flame exhibit featuring some of his favorite music artifacts. White describes Nash beaming "like a kid in a candy store" while discussing the exhibit at a press preview. I have to start getting invited to these kinds of things.

WXRT's ON XRT Volume 17 became available at Target stores in the Chicago area yesterday. As with past volumes, all the tracks were recorded at local venues and aired at some point on the progressive rock station. This year's edition is supported by Blue Cross Blue Shield and proceeds will benefit The City Project and the Logan Square Neighborhood Association. Only a limited number of ON XRT Volume 17 are being sold, and they're sure to go quickly.

While at Target, I noticed that you can now buy all three Austin Powers movies in a single DVD set. That way, it will be easier to see just how much the series deteriorated after the first effort.

As noted here Thursday, The Smithereens plan to release 30th Anniversary celebration of their power pop masterpiece Especially For You in January. Titled ESP3CIALLY F0R YOU, this new edition will have 47 tracks and will be available as a double CD or digital download. The group also plans to unveil a full album of new originals next Halloween.

Congratulations to Mary-Arrchie Theatre's Artistic Director Rich Cotovsky, who will receive the Seventh Annual Corona Award from Eclipse Theater on December 15 at Athenaeum Mainstage Theatre. The award is being given in recognition of his extensive involvement in the local theatre scene. Cotovsky will perform in Mary-Arrchie's production of David Mamet's American Buffalo, along with Rudy Galvan and Stephen Walker when it begins its run on January 28.

Whitewolfsonicprincess and 10 other musical acts will be making merry at a Toys For Tots benefit tonight at Red Line Tap on Chicago's north side. The lineup includes The Telepaths; Winston Gerbil; Ten Gallon Hats/5 Gallon Heads; The Myths Of Suburbia; Lady Stardust; The Revellettes go-go dancers; The Dark Room Men; Jeff Brown and The New Black; and The Rut. Meanwhile, Whitewolfsonicprinces is looking to raise money for its third release The Shadow Of The Marigold via an IndieGoGo campaign.

Milwaukee's power pop masters Trolley have a record release party for their new effort Caught In The Darkness tonight at Linneman's River West Inn in Milwaukee.

The Kooks' Hello, What's Your Name and Cold Play's A Head Full Of Dreams were among the new albums released today.

There's still time for Chicago area music acts to record a holiday greeting that could be used on the 24th Annual Local Anesthetic Holiday Special on WXRT. Host Richard Milne is very specific about what he's looking for, so be sure to read the rules before sending something to him. I've listened to this special for a number of years and they're always a lot of fun.
Posted by Terry Flamm at 12:11 PM