Let's Hear It For Old Fezziwig 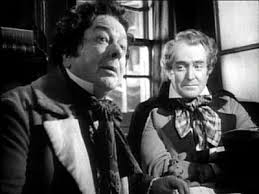 In the classic novel A Christmas Carol by Charles Dickens, the conniving businessman Mr. Jorkin told Mr. Fezziwig to sell his company to vested interests while he still had the chance. Fezziwig resisted this advice. “I’ll have to be loyal to the old ways,” he explained, “and die out with them if needs must.”

If Fezziwig had been able to see centuries into the future, he would have appreciated that at least his generous spirit never died out. Owners of large, medium, and small businesses still provide the type of merriment and good cheer he gave his employees, including the young Ebenezer Scrooge. Whether they’re held in a banquet hall, club, corner bar, or in the company lunchroom, these gatherings celebrate the season and boost morale.

So here’s a toast to the bosses and coworkers at company parties I’ve attended, from my days at Montgomery Ward, through Arthur Andersen, Borders bookstore, the Illinois Entertainer, the Famous In The Future comedy group, and in more recent years, freelance assignments at ad agencies. Some of these people are still my friends (at least through social media) and I’ve lost contact with several others. But with guidance from the Ghost Of Christmas Past, they all come flowing back right around this time every year.

And now, an appropriate musical selection (from the terrific holiday album Christmas With The Smithereens) that would be perfect for any company party.
Posted by Terry Flamm at 2:52 PM