Odds And Sods And A Birthday Greeting 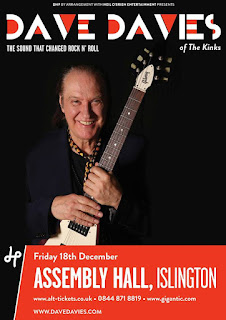 Kinks fans who attended this Dave Davies gig got an early Christmas present.

First off, I'd like to wish my wife Pam (that's not her in the photo above) the happiest of birthdays. She's been a guiding light and a driving force (often literally) in my life for several years, and she set up this blog for me. Pam also inspired me to write two novels with a main character that's based on her. Now I just need to get them published. Thanks for all your help and support, Sweeeeeeeetie!

In addition to the good news about Cheap Trick being inducted into The Rock And Roll Hall Of Fame, Ray Davies joined his brother and fellow founding Kinks member Dave on "You Really Got Me" during a concert at the Islington Assembly Hall in London a few days ago. As noted by Daniel Kreps in Rolling Stone, it was the first time the feuding siblings performed together in 20 years, and gives fans hope for a Kinks reunion.

The Dave Davies touring band includes guitarist Jonathan Lea and bassist Tom Currier from The Jigsaw Seen, as well as drummer Dennis Diken from The Smithereens. It was fun seeing their posts on Facebook about being part of that London concert. Lea stated, "It's overwhelming right now but I'll tell the story as soon as I get a chance." David Quaife, brother of the late Kinks founding member bassist Pete Quaife, posted, "Still buzzing!!!!!!!!! Posting photos and videos later." David created the Pete Quaife Foundation in his brother's name to help children on dialysis.

Children by the million can scream for Alex Chilton when The 11th Annual Alex Chilton Birthday Bash takes place on Monday, December 28 at The Empty Bottle on Western Avenue. The performers celebrating the late pop/rock and roll genius include Certain Stars, Tomorrow The Moon, Go Time!, and The Injured Parties There is no admission charge for this tribute, which kicks off at 9:00 PM.

Elsewhere on the annual event scene, Australian multi-instrumentalist and power pop ambassador Joe Algeri is offering another seasonal song as a free download on his Bandcamp page. Be advised that "Holiday On Mars" has some rough edges, but it also spotlights Algeri's knack for catchy melodies. The Christmas Crew band includes his wife Erika (singing in French), rhythm guitarist Joe Colombini from The Outryders, and bassist Herb Eimerman and Stefan Johansson from the international trio The Britannicas.
Posted by Terry Flamm at 12:14 PM