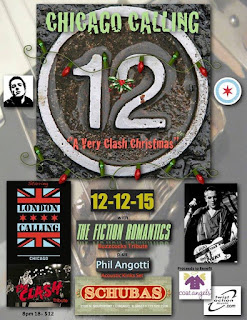 Slumgullion comes a day early this week due to a few Friday night events I want to mention before they actually take place.

Also, keep in mind the Cornerstones of Rock: American Garage TV special featuring The Ides Of March, The Buckinghams, The Cryan Shames, The New Colony Six, The Shadows of Knight, The McCoys, and The American Breed airs at 7:30 PM and 9:30 PM on WTTW Channel 11 in Chicago tonight. WGN air personality Wendy Snyder is the host. It's part of a pledge night, so be prepared for frequent interruptions. Still, if you've got some extra dough, supporting public television is a great idea.

Professor Moptop, whose detailed and entertaining behind-the-scene reports on Fab Four songs air on WXRT's Breakfast With The Beatles show, will make a rare live appearance at FitzGerald's in Berwyn tomorrow night. The WhatFour tribute band (Phil Angotti, Scott Ligon, Casey McDonough, and Matthew Warren) will be performing the UK version of Rubber Soul in its entirety, along with lots of other Beatles songs.

On Saturday night, Phil Angotti will be at Schubas on Chicago's north side playing an acoustic set of Kinks songs as part of A Very Clash Christmas triple bill with the London Calling tribute band, and Buzzcocks tribute band The Fiction Romantics.

Razorhouse, The Handcuffs, and I Lost Control will be sharing the stage tomorrow night at Martyrs' on Lincoln Avenue.

Radio host and E Street Band member Little Steven Van Zandt is selling a limited amount of tickets for Bruce Springsteen's The River Tour, with all proceeds going to the Rock and Roll Forever Foundation. A number of options are being offered, including special ticket packages. The tour brings Springsteen and The E Street Band to the United Center in Chicago on January 19, with additional concerts in Pittsburgh; New York; Washington, DC; Boston; Atlanta; and other cities.

The 4th Annual Chicago Art Girls Holiday Pop Up Shop will take place this Saturday and Sunday at the Alexander Graham Bell Elementary School at 3730 N. Oakley in Chicago. The event is sponsored by the Dizzy Cow store, and will feature over 40 local artists.

Mary-Arrchie is celebrating the closing of Ibsen's Ghosts next Saturday, December 19 with a karaoke fundraiser. Its next production, David Mamet's American Buffalo, runs from January 28 to March 6. The cutting-edge storefront theatre is calling it quits after this current season, so it's a good idea to drop by as often as you can.

The Romantics's new To You single, featuring "Coming Back Home" and a rollicking rendition of "Deck The Halls," is now available on iTunes.

Lots of Chicago area bands will be celebrating the season via brief and hopefully clever musical snippets when the 24th Annual Local Anesthetic Holiday Special airs this Sunday night on WXRT. The show will air again on the following Sunday. And a tip of the Santa hat to Local Anesthetic host Richard Milne for decades of supporting the Chicago music scene.

Cliff Johnson of Off Broadway and Pezband fame will be performing with The Raine next Friday, December 18 at 27 Live in Evanston.
Posted by Terry Flamm at 9:36 PM