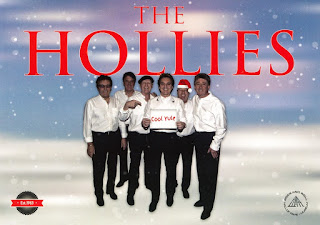 Slumgullion is being replaced this week with a steaming and delicious bowl of Christmas punch.

I didn't get an official Christmas card from The Hollies this year, so it's nice to see that they've posted one on their Facebook page.

Now that a Facebook campaign to get Cheap Trick inducted into the Rock And Roll Hall Of Fame has succeeded, other individuals are hoping to do the trick with the very worthy English band Squeeze. Led by the songwriting/singing duo of Chris Difford and Glenn Tilbrook, Squeeze arrived via the second wave of British Invasion bands, and their clever and catchy songs have stood the test of time and inspired other artists. Squeeze just filmed a rock video for the title track of its recent and very impressive Cradle To The Grave album.

Better Things do happen. Ray Davies joined his brother and fellow founding Kinks member Dave for a rendition of "You Really Got Me" during the encore at a concert Dave Davies performed on December 18 at the Islington Assembly Hall in London. While there are no guarantees when it comes to these brothers, Ray's surprise guest appearance certainly give fans hope for a reunion.

The 11th Annual Alex Chilton Birthday Bash will be held next Monday, December 28 at The Empty Bottle on Western Avenue. Several local performers are involved, including Certain Stars, Tomorrow The Moon, Go Time!, and The Injured Parties This free event starts at 9:00 PM.

Phil Angotti, Tommi Zender, Dann Morr, and Joe Camarillo will be performing John Lennon and Beatles songs, along with Rachel Drew and Bitter Roots next Tuesday, December 29 at Martyrs on Lincoln Avenue. The music starts at 8:00 PM.

A few years back, international power pop trio The Britannicas crafted the jangling holiday song "Chris Hillman Christmas" in honor of The Byrds' legendary guitarist. They got a pleasant surprise this week when Hillman praised their effort on his Facebook page.

There's still some time to be part of the annual Broken Hearted Toy Big Ideas extravaganza. I'll kick off the new year with a list of people or organizations, stating what I think they will or should accomplish in 2016. If you're a musician, thespian, DJ, author, artist, comedian, any other creative type and would like to send me your goals in a few concise sentences, I would be happy to include them in my Big Ideas post at the beginning of January. Let me know via my gmail account.

An eclectic lineup of bands will be performing on the Broadcast Boulevard stage from 7:00 PM to 12:30 AM when the very first Chi-Town Rising New Year's Eve celebration takes place on December 31 in the heart of downtown Chicago. The performers include recent Rock And Roll Hall Of Fame inductees Chicago; Americn Authors, of "Best Day Of My Life" fame; The NuBlu Band, featuring Carlise Guy, the daughter of legendary blues man Buddy Guy; the festive Latin band Radio Free Honduras; and blues/soul favorites JC Brooks and the Uptown Sound. Note: The Chi-Town Rising organization recently decided this will NOT be a free event; and the tickets are fairly expensive.

I'll bet he'd autograph your life-sized map of the world. Comedian Steven Wright will be bringing his off-kilter observations and deadpan delivery to the Chicago area next April, with a show on the 8th at the North Shore Center in Skokie and the 9th at The Arcada in St. Charles.

As recently reported in the Chicago Tribune, the city has ditched plans for bringing the critically acclaimed Royal de Luxe and its giant puppets here next June. My wife Pam and I saw this theater company working its magic while we were vacationing in London in 2006. It's disappointing to learn that we won't get a chance to see them in Chicago.

All Things Must Pass: The Rise And Fall Of Tower Records will be shown on Sunday, January 24 and Tuesday, January 26 at the Gene Siskel Center in Chicago. It's director Colin Hanks' documentary on the once successful record store chain, as well as the music industry in general.
Posted by Terry Flamm at 3:13 PM