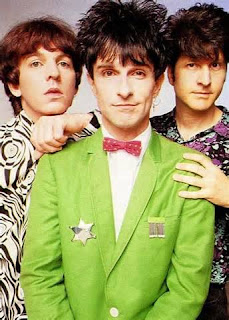 The Elvis Brothers back in the day. They've still got big ideas.

It’s time for my open invitation to participate in the annual Broken Hearted Toy Big Ideas extravaganza. I'll kick off the new year with a list of people or organizations, stating what I think they will or should accomplish in 2016. The name "Big Ideas" comes from an Elvis Brothers song on their flawless, Adrian Belew-produced 1985 LP Adventure Time. Per tradition, I’m also asking musicians, theatre groups, radio stations, authors, artists, comedians, and other creative types to describe their plans in a few sentences that I can include in the post. Let's keep it positive and nonpolitical.

By using the following examples, I'm in no way excluding those involved from sending in their own descriptions. Christopher David of the Chicago-based band Magatha Trysty is releasing a solo debut titled The Houdini Tapes, and also plans to release the next Magatha Trysty album soon. Dana Jones is an artist who just opened her own studio near Tulsa, Oklahoma. Mary-Arrchie Theatre will wrap up its final season (after 30 years of giving Chicago cutting-edge productions) with what could be the best Abbie Hoffman Died For Our Sins festival ever. The alt rock band Whitewolfsonicprincess will release its next album The Shadow Of The Marigold, and probably continue its eclectic series of performance events at Red Line Tap. And even though The Elvis Brothers have gone their separate ways, they're all still active in the music biz.

So give some thought to the amazing success that could result from the perfect combination of luck and your initiative, and send it to the Broken Hearted Toy gmail address within the next few weeks. Or if you have my email address, feel free to use that.
Posted by Terry Flamm at 8:25 PM