Popping Around The Christmas Tree 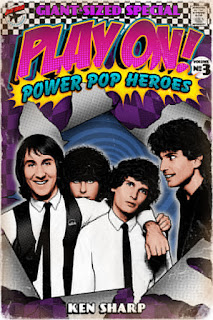 A few more gift-giving or gift-getting suggestions from the world of entertainment.

Noted rock critic Ken Sharp's limited-edition Play On - Power Pop Heroes Volume 3 will be available through the end of December from the Pop Geek Heaven website. As with Volumes 1 and 2, Sharp conducted extensive interviews with musicians from bands that played an essential role in the development of power pop. The first book featured acts Sharp called progenitors; including The Beatles, The Beach Boys, The Hollies, The Zombies, The Who, The Byrds, The Kinks, Big Star, The Raspberries, The Move, and Badfinger. Sharp moved on to pioneers of the genre in his second effort; such as Cheap Trick, Shoes, Pezband, Dwight Twilley, Squeeze, The Ramones, The Records, XTC, and Sweet. The various band members provide commentary on their most influential albums, along with informative and entertaining anecdotes. Volume 3 will cast the spotlight on The Knack, 20/20, Paul Collins Beat, Off Broadway, The Runaways, Marshall Crenshaw, The Plimsouls,  The Romantics, and others.

The Second Disc is an essential website to follow for anyone interested in collecting vintage and classic pop recordings. Those who sign up to receive emails will be alerted to new releases like John Savage's 1966 - The Year The Decade Exploded. As the always knowledgable Second Disc editor Joe Marchese explains, this double CD offers a mix of major hits from The Who, The Supremes, The Lovin' Spoonful, and The Association with rarities from lesser known acts like The Wheel-a-Ways and The Olympics. It's being released by Ace Records as an audio companion to Savage's book of the same name, and includes a 28-page booklet with extensive liner notes. The CD is already available on Amazon; the book is due out in April, 2016.

The Second Disc also recently had a post by Northwestern University graduate and music historian Randy Fairman about the recent digital release the Beach Boys Live In Chicago 1965 album, which features previously unreleased live recordings from the band's performances at the Arie Crown Theater on March 26 and 27 of that year.

There's a whole galaxy of books out there for Doctor Who fans but the more artistically inclined ones might gravitate toward the BBC's Doctor Who Impossible Worlds. This hardcover effort was put together in cooperation with the long-running British TV show's Art Department, and offers an insider's view to how costumes, sets, special effects, and even the TARDIS were created. The book covers sketches, models, and storyboards.
Posted by Terry Flamm at 4:41 PM