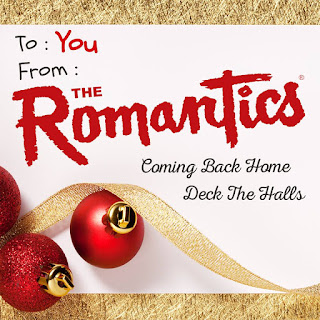 The Romantics make their Christmas music debut in rollicking fashion with a brief but joyous rendition of "Deck The Halls" that's now available as part of the To You single on iTunes. It's being paired with "Coming Back Home," which I believe is their first new original in some time. Both songs evoke the early days of The Romantics, when the band fueled 1960s influences into harder-edged but relentlessly catchy arrangements. Original members vocalist-guitarist Wally Palmar, guitarist-vocalist Mike Skill, and bassist-vocalist Rich Cole, along with drummer Brad Elvis, who joined in 2004, are still very active on the concert scene.

"Deck The Halls" was probably meant to be a party song right from its earliest days in the 1870s, but The Romantics spike the punch with revved-up guitars, pounding drums, and some boisterous "fa la la la la" singing. Anyone who actually decorated for the holidays at this pace would leave the house in a shambles. Still, this version captures the celebratory holiday spirit and is a of fun.

The energetic "Coming Back Home" is about a guy in a rush to return to his loved one, so it could be seen as a holiday song as well. The harmonica playing and infectious beat recall The Beatles, but The Romantics add a bit more of a guitar-driven, hard rock feel. This song will no doubt remind long-time fans of "What I Like About You," and it would have fit in perfectly on that impressive 1979 self-titled debut from The Romantics.
Posted by Terry Flamm at 2:54 PM