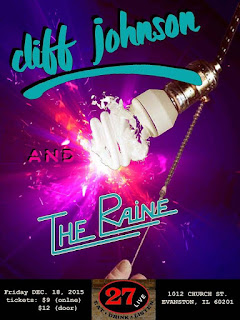 Cliff Johnson of Off Broadway and Pezband fame will be performing with The Raine tonight at 27 Live in Evanston. I caught this inspired match-up of lead vocalist and band at the Minstrel Palooza event at Durty Nellie's this past September, and I highly recommend it to power pop fans.

Yesterday's post concentrated on Cheap Trick's induction into the Rock And Roll Hall Of Fame, so today I'll extend congratulations to their fellow honorees Chicago, Deep Purple, Steve Miller, and NWA. I was also rooting for The Smiths and Los Lobos, and certainly Yes was qualified, but it's even harder to fathom how The Cars were passed over. The Boston-based group's self-titled debut was pretty much the starting gate for new wave's dominance back in the late 1970s and 80s, and several of their top hits are still FM radio staples today. Here's hoping they cruise through the induction process next year.

Chicago area fans of Off Broadway, Pezband, and Cheap Trick likely remember Scraps, a southwest side band that arrived around the same time as those acts and pursued a similar catchy, hard-edged sound. I still have their seven-inch "Strike Three/"Gossip Gossip" and 12-inch "Hits" singles, and it was great to see former Scraps lead vocalist Pat Deane mention Scraps Vol. 1, a digital collection of 19 songs from the band's prime years, in a recent Facebook post. In addition to "Strike Three" and "Gossip Gossip," Vol. 1 also includes live version of "Twilight Zone" and "Oh Mary/Can't You See."

Congratulations to author Stephanie Kuehnert on having her novel I Wanna Be Your Joey Ramone optioned by some producers who plan to turn it into a movie. Having read Kuehnert's backstage look at a conflicted young woman's emergence as a counter culture rock star battling drug and alcohol abuse as she searches for her birth mother, I'd certainly be interested in seeing a screen adaptation.

The Romantics's new To You single featuring "Coming Back Home" and a rollicking rendition of "Deck The Halls," is now available on iTunes.

Just a reminder about the annual Broken Hearted Toy Big Ideas extravaganza. I'll kick off the new year with a list of people or organizations, stating what I think they will or should accomplish in 2016. I’m asking musicians, theatre groups, radio stations, authors, artists, comedians, and other creative types to describe their plans in a few sentences that I can include in my Big Ideas post at the beginning of January. Let's keep it positive and nonpolitical.
Posted by Terry Flamm at 9:04 PM