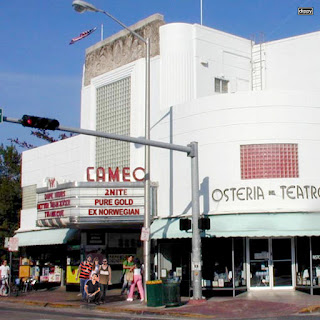 Singer-guitarist Roger Houdaille formed Ex Norwegian in 2008 and the band has established a loyal following through various incarnations between Miami and New York over the years. Its song "It's A Game," originally done by String Driven Thing (but a bigger hit for The Bay City Rollers), was recently released as part of a split single with the European band Permanent Clear Light on Fruits de Mer. That's a badge of honor for those of us who are well-acquainted with the vinyl-only UK label's high standards for garage, psychedelic, and prog music.

Having endured various band breakups and even some recent health issues, it's all the more impressive that Houdaille was able to record the consistently top notch Pure Gold with his current Ex Norwegian lineup of vocalist Michelle Grand, guitarist Lucas Queiroz, bassist Guiseppe Rodriguez, and drummer Fernando Perdomo. The new album is available for pre-order on Bandcamp and will be released on December 11 in special autographed and deluxe bonus disc CD-R editions. All proceeds will go toward helping pay Houdaille's medical bills.

Ex Norwegian taps into power pop, psychedelic, and indie rock on this melodic collection of originals and deep covers of songs by Paul McCartney, Melanie, The Shirts, and others. The previously mentioned first single "It's A Game" maintains the quirky charm of the original while establishing the essential role Houdaille and Grand's harmonies will play on Pure Gold. Their vocal interplay is more adventurous on "Cyclone" and "On The Sidelines," energetic songs that call to mind bands like Trona, Game Theory, and Let's Active. "Keep Under Cover" is light and whimsical while the title track features some slinky bass playing from Rodriguez. "Shadow Ships," fueled by guitarists Houdaille and Queiroz, exudes the power of catching Ex Norwegian in a local club.
Posted by Terry Flamm at 10:28 PM