What's New With Neil And Graham 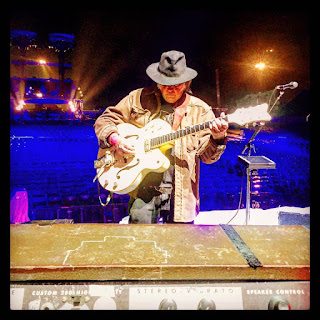 Neil Young turned an amazingly vital 70 years old today. I still have an extra $6.50 ticket for his January 12, 1973 'Triangle Presents' show at the Arie Crown Theatre on Chicago's lakefront. I was supposed to go with a young woman I worked with at Montgomery Ward, but I approached our first date with a Charlie Brown level of incompetence and she bailed on me. Rats. The show itself was fantastic. A few years later, I would thoroughly enjoy a Crosby, Stills, Nash and Young concert with some different people from Montgomery Ward. Even though none of them was my date.

Young continues to release albums at a steady pace; combining live performance compilations like Bluenote Cafe and new material. The two-CD/DVD set The Monsanto Years, which he recorded with the Promise Of The Real band, is fueled by his passion for saving what's left of the environment and battling big corporations. He continues to tour and once again played an essential role in this year's Farm Aid benefit concert. Happy Birthday, Neil. Keep on rocking in the free world.

It will cost more than $6.50, but there are still a few days left to make a bid on eBay for a May 20, 2016 BBC Radio 4: Mastertapes VIP Experience with Graham Nash. The top bidder and a guest will get a behind-the-scenes look at the BBC Maida Vale studios in London; meet Nash; and watch him perform as the programme (Brit spelling) is being recorded. The entire amount of the winning bid will benefit the BBC Children In Need foundation.

There was a post on Nash's Facebook page on November 9 promising an upcoming important announcement. It's not clear if that was referring to the BBC Mastertapes session or if something else is on the way. Like Young, Nash is a creative force who continues to tour and create vital music that confronts major social and economic issues.
Posted by Terry Flamm at 8:38 PM