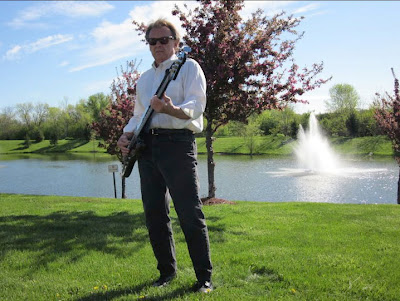 Watch out for the migrating birds. Eimerman finally gets to play outside. Photo from The Britannicas Facebook page.

The Britannicas recently posted a fun video for “(Talkin’ ‘bout) Summer” on YouTube and Facebook. The song is on a recently recorded 3-sided single that once again finds this inventive trio working in perfect harmony even though each member lives in a different country. Vocalist-guitarist Magnus Karlsson makes his home in Sweden; vocalist-drummer Joe Algeri resides down under; and vocalist-bassist Herb Eimerman is from the States.

Similar to how they work on their audio projects, each member filmed his bit separately, and the footage was eventually edited into a single video. Not surprisingly, Eimerman had to wait for the Chicago area weather to get warm enough for him to venture outside for the shoot. Watching the clip, it looks like he might be at the Morton Arboretum in suburban Lisle. Karlsson did his bit, with help from his daughter, near a body of water, and Algeri, who plays a Rickenbacker guitar and drums in the video, stayed mostly indoors. It’s not super slick, but the homespun approach does convey the idea of savoring the season. The three-sided digital single is available for a free download at Algeri’s site and it’s definitely worth checking out.

Karlsson’s “(Talkin’ ‘bout) Summer” is a breezy tune that celebrates the season when the “sun shines bright and the kids get noisy.” As usual, the ringing guitars recall The Byrds, but there are some lush Beach Boys style harmonies as well. The well-crafted “Bleed Between The Lines” was composed by Eimerman with a nod toward The Beatles. The title may sound violent but actually the message here is one of togetherness, and how various lives flow into each other. Algeri keeps the focus on the mid-1960s with the shuffling beat and whimsical lyrics of “I Work At The Post Office.” The arrangement recalls Jeff Beck’s version of “Hi Ho Silver Lining” as Algeri spins the tale of a daydreaming postal worker, and fades out with a silly chant of “lick, stamp, lick, stamp.”