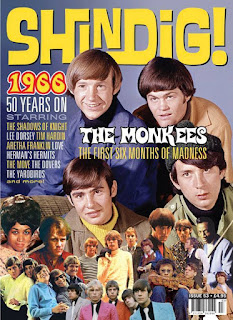 No Slumgullion again this week, due to the holidays. In its place, I'm offering champagne to all my Broken Hearted Toy readers. Figuratively speaking, of course.

Today and tomorrow will be the last days I'll be taking submissions for my annual Big Ideas post, which I'm hoping to offer some time around the start of 2016. If you have great plans for yourself; your band; your theatre or comedy group; your artistic endeavors; anything in the creative realm, and can express that idea in a few sentences, I'll be happy to use it. Or, if you have a positive suggestion for someone in the entertainment world, send that along too. Just contact me through via brokenhearted@gmail.com.

Happy Birthday to the brainy Monkee, Michael Nesmith. The January issue of Shindig (one of the coolest rock mags around) is devoted to the year 1966, and features The Monkees on the cover. Other acts profiled include The Move, Herman's Hermits, Aretha Franklin, The Yardbirds, Love, and Chicago's own The Shadows Of Knight. In fact, I found out about this issue via a post from Shadows Of Knight lead vocalist Jimy Sohns on the Chicago Rock Concerts 1960s and 1970s Facebook page. Mr. Sohns, who is still very active on the music scene, was interviewed for this special edition. Shindig can be found at most Barnes And Noble stores.

Shindig isn't the only magazine singling out specific years from the 1960s. The History Of Rock series features vintage articles, photos, and even ads pulled from the archives of NME and Melody Maker. At $16.99, these magazines cost more than most periodicals, but are well worth picking up at Barnes And Noble, if you're into that era. I'm hoping to post something in the near future about the 1968 and 1969 issues I bought.

I mentioned a while back that Scraps, one of my favorite Chicago bands from the late 1970s and early '80s club scene, has just released Vol. 1, a collection of vintage studio and live recordings, on iTunes. Now comes word that another popular Chicago club act, The New Duncan Imperials, are going the same route by making the 10 songs from their limited edition Live, Rare And Bad cassette available on iTunes for just $5.99.

There's a Go Fund Me campaign underway to help Chicago area band Killer Moon recover from the recent theft of its van, instruments, and gear.

George Fest, a tribute to George Harrison that was recorded and filmed on September 14, 2014 at The Fonda Theater in Los Angeles, will be released as a 2 CD/DVD package and in various other formats toward the end of February. The event was organized by George's son Dhani, and featured performances by Brian Wilson and Al Jardine of The Beach Boys; The Flaming Lips; Black Rebel Motorcycle Club; Ann Wilson from Heart; Ben Harper; Perry Farrell from Jane's Addiction; Norah Jones; "Weird Al" Yankovic; Chase Cohl featuring Brian Bell from Weezer; Ian Astbury from The Cult; Nick Valensi from The Strokes; Britt Daniel from Spoon and others.

There are only a few days left to help Chicago alt-rock band Whitewolfsonicprincess fund its upcoming release The Shadow Of The Marigold via its IndieGoGo campaign.

Dot Dash, the Washington, DC based quartet that crafts melodic, guitar-driven gems inspired by 1980s bands like Translator and Wire Train, has just created a video for the song "Flowers" from its recent Earthquakes and Tidal Waves album. I've favorably reviewed each of the albums Dot Dash has put out, and count them among my favorite acts I've come across while doing this blog.

Vulgar Boatmen, a Chicago-based band that garnered a lot of attention with a pair of albums in the early 1990s, is releasing a 25th Anniversary version of its debut You And Your Sister. The CD will offer remixes of "Decision By The Airport" and "The Street Where You Live," along with previously unreleased bonus tracks. The band has release shows planned for Chicago and Indianapolis.

Jackson Browne, Graham Nash, and David Crosby recently became Ambassadors for the Seva Foundation, a charity organization dedicated to raising awareness that 80% of blindness and visual impairment can be prevented or cured. Other musicians, such The Grateful Dead and Bonnie Raitt, have helped Seva in the past by performing benefit concerts.

Dean Milano is sort of a modern-day Renaissance man in that he's an author, folk singer, humorist, and builder of model cars. He's currently on a Music and Old Toys tour that will find him performing and talking about antique toys at the Woodstock First Saturday event on January 2, The Timbers in Shorewood on January 9, and the Floosmoor Library on January 14.

The Dayna Clay Band will stage a Rock Against Rape event called Unplugged: A Survivor's Story In Scenes and Songs January 7 at the Found Cabaret in Evanston. The $10 admission will benefit RAINN and The Kennedy Forum/Kennedy Forum Illinois.

If someone had asked me to predict which 1970s sitcom actress would be getting rave reviews for her work in a hip hop musical running at the Bank Of America Theatre in downtown Chicago this winter, I wouldn't have come up with Georgia Engel. Even with a hundred guesses. But Engel, who played Ted Baxter's ditsy wife Georgette on The Mary Tyler Moore Show, garnered praise in recent reviews in the Tribune and Sun-Times for her rapping and hoofing in Gotta Dance. Apparently, the musical is based on senior citizens who dance during halftime at NBA games. I know a woman, the mother of a good friend, who does those type of halftime shows for a professional basketball team. I wonder if she'd get a kick out of Gotta Dance.
Posted by Terry Flamm at 6:31 PM