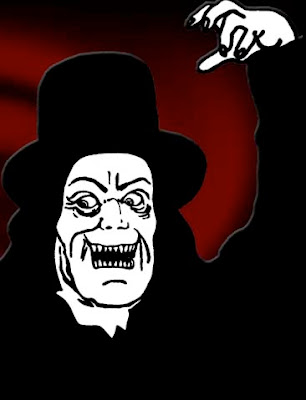 Graphic taken from WGN Creature Features website.
Time to wind up another Halloween season here on Broken Hearted Toy. Here's a post that previously appeared in 2009 and 2010. Hey, it's a tradition.

“Experiment In Terror” had a slow, ominous beat and twanging guitars that conjured images of a monster creeping along some darkened street, but it was composed by Henry Mancini for a 1962 cops and robbers movie called Experiment In Terror. In the Chicago area, this song is much better known as the theme for Creature Features, which presented old time horror movies like House Of Dracula, Frankenstein, The Wolf Man, and The Mummy’s Ghost on WGN every Saturday night from 1970 to 1976.

“Experiment In Terror” recalls our youthful fascination with monsters; the hours we spent trick or treating; carving pumpkins; and going to neighborhood Halloween parties in garages or basements. Plus, it’s a great song. In addition to the eerie guitars, a string arrangement added drama and a cinematic feel. Later, there’s even a sexy sounding saxophone that put the vamp in vampire.

P.S. My wife and I didn't get a single trick-or-treater this year.