When You’re Having Fun 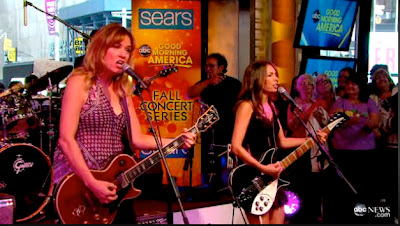 The Bangles’ two-song performance on Good Morning America today served as a potent advertisement for their new Sweetheart Of The Sun CD and current tour. Backed by keyboards player Greg “Harpo” Hilfman and bassist Derrick Anderson, original band members Debbi Peterson, Vicki Peterson, and Susanna Hoffs made the Prince-penned hit “Manic Monday” sound just as fresh as when it broke them into the Top 40 back in the 1980s. It’s a good sign when musicians still so obviously enjoy delivering a song they’ve played hundreds of times by now.

Perhaps even more impressive was how well the title track from the newly released CD fits in with The Bangles’ best material. It’s an easy-going song built on three-part harmonies and ringing guitars, and just one of the catchy gems that can be found on Sweetheart Of The Sun.