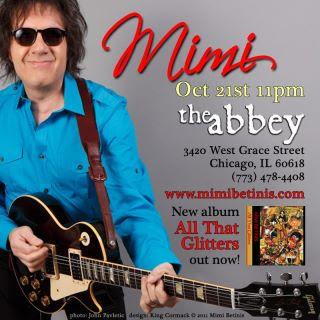 The Mimi Betinis Group will be performing tonight at The Abbey Pub on Chicago’s northwest side. Betinis served as the lead vocalist-guitarist (following after Cliff Johnson) for one of Chicago’s first and best power pop acts, Pezband. His impressive solo CD All That Glitters, released in late 2010, showcased his songwriting abilities and distinctive vocals. The show starts at 11:00 PM.

Congratulations to Little Steven Van Zandt on reaching the 500 episode mark for his Underground Garage syndicated radio show. There's a video stream of the event, which is being held today at the Hard Rock Cafe Times Square. Fans might still be able to catch at the Underground Garage website.

Singer-guitarist/artist Slink Moss has a record release show for his latest effort, Black Lake scheduled for tonight at The Wooly on 11 Barclay Street in New York

The Mutiny has an eclectic night of Halloween fun planned for Friday, October 28th that will include Stardust* The David Bowie Tribute streaming live. Comedians Patty Vaccarella, Thomas Bottoms, Chevy Debbie, and Bill Carlton will perform between 8:00 and 9:00 PM, followed by drag performer/beauty pageant contestant Elysse Giovanni. The music kicks off at 9:30, with performances by Moist Guitars, Lisa Lightning, Robert Harvey, Breadhead, Rich Experience, and Velva.

Singer-guitarist Diane Christiansen is probably best known for work with the alt rock/C&W band Dolly Varden, which she co-founded with her husband, singer-guitarist Steve Dawson. But she’s an accomplished artist as well, and will have an exhibit of her work titled Enough Space in the Head to Breathe running from October 28th through November 26th at the Kasia Kay Art Projects Gallery. There will be an opening reception from 6:00 to 8:00 PM on Friday, October, 28th, and an artist’s talk from 12:00 to 1:00 PM on Saturday, October 29th.