Songs For Halloween: The Insiders - “Ghost On The Beach” 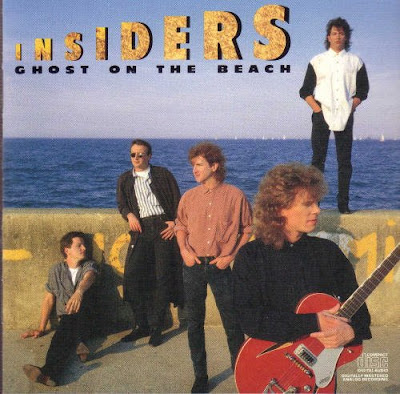 First of all, here’s wishing a happy birthday to John Lennon. Chicagoans looking to celebrate the occasion can drop by The Temple Bar tonight at 6:30 for singer-guitarist Phil Angotti’s solo acoustic John Lennon B-Day Celebration. It’s an all ages show, so bring the kids. The Temple Bar is located at 3001 N. Ashland.

Continuing with this month’s format of offering a previously-posted Halloween-related song profile on each weekend day, here’s a look at “Ghost On The Beach” by The Insiders

Things certainly looked promising back in 1987 when The Insiders released their debut, Ghost On The Beach, on Epic. The title track, written by John Siegle and Gary Yerkins, was not only a perfect blast of power pop with muscular guitar playing and an indelible melody, it also offered the sure-fire elements of a summer romance and a hint of the supernatural. The sexy video went into heavy rotation on MTV, and helped The Insiders land a beer commercial.

The well honed lyrics describe a one night stand on the beach beside a romantic campfire as the waves came crashing in. “Making love almost the moment we met./A soggy Romeo, a soakin’ wet Juliet.” Later, it’s almost as if the encounter never took place. “The sand is smooth like no woman ever walked there./The wind silent like no man ever spoke.” All of which leads the guy to an eerie conclusion. “As I stand under the moon/And I’ll see you, washed up, some ghost inside a bottle/Out on the beach.” Guess that means he didn’t get her number.