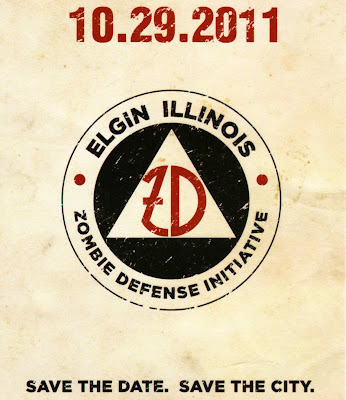 Halloween Tribute Band Madness. The Abbey Pub kicks off Halloweekend 2011, two days of local bands covering musical legends, tonight with a lineup that features American Headlight Noise as Bruce Springsteen; John Aselin (with guest Phil Angotti) as The Rolling Stones; Bon Mots as Alice Cooper; The Webstirs as Chicago; Penthouse Sweets as Nick Lowe, and Metropolly as Hole. Tomorrow night’s acts are Joel Paterson as ZZ Top; Phil Angotti as The Who; Androgynous Mustache as Huey Lewis, Unknown Pleasure as Joy Division; Grooved Surface as Bachman-Turner Overdrive; Tuffy UK as Patti Smith; and Zapruder Point as Billy Bragg The party kicks off at 8:30 each night, and there’s a $12 admission fee ($10 in advance).

I’m Not A Doctor Who Specializes In Zombies But I Play One On TV. Most suburbs base their Halloween celebrations around a few hours of officially sanctioned trick-or-treating, and possibly a party for the kids afterward. Elgin made bigger plans this year. Tomorrow evening, the western suburb's downtown area will be consumed by Nightmare On Chicago Street an elaborate mix of live music, street performers, food vendors, and special guests Svengoolie and Vincent Price's daughter, Victoria. Oh, and some zombies.

The Elgin officials also asked resident Dave Metzger to put together some footage of zombies on a rampage, bulletins, and a news conference with the mayor. The footage will be shown in segments aired on TVs scattered around the festival area. Metzger used to work with my wife Pam, and had a recurring role as a Beatles button obsessed lunatic on the Manchester Gallery series I created for the Sunday Morning Coffee With Jeff Internet show.

Metzger recruited SMCWJ host/creator Jeff Kelley to tape the zombie footage, and asked if I could play a doctor who's an expert on zombies. So if you visit downtown Elgin tomorrow night, you might just see me on one of those TVs. I'm also in the press conference scene. The more conventional entertainment includes sets by the tribute bands Kashmir and ARRA, a burlesque show, and a costume contest with Svengoolie. Admission is $7.

Spinning Must Come 'Round. The Second Disc, an essential online newsletter that often seems to have the scoop on all kinds of cool upcoming CD and vinyl releases, has good news for Elvis Costello fans. A recent edition heralds the November 28th arrival of Costello's Return of the Spectacular Spinning Songbook. The limited edition box set (only 1,500 numbered copies are being produced by the Hip O label) will offer 16 songs that were recorded at a pair of gigs Costello and his band The Imposters played in L.A. earlier this year.

The enticing extras include a DVD of live performances from the second night that finds Costello covering The Rolling Stones and Nick Lowe, and being joined by Bangle Susanna Hoffs on "Tear Off Your Own Head." The set also includes a 10" EP, a hardcover book, poster, and autographed postcards. At $251 the deluxe edition might be out of reach for a lot of Costello fans, but as The Second Disc points out, there will also be a version that offers just the CD and DVD.

Free Falling Song. The original members of The dB's continue to keep their fans waiting for that much anticipated next CD, Falling Off The Sky, but at least they're making a new song available on the official dBs website "Revolution Of The Mind," which features Peter Holsapple, Will Rigby, Gene Holder, and Chris Stamey, is being described as an energetic rock tune with political overtones. The full CD is scheduled to be released next Spring.

Melismaticmania. Local coed rockers The Melismatics have signed to Pravda Records. Their new CD, Mania is due out January 10, 2112.

Spooky Fun. Sunday Morning Coffee With Jeff will have its annual Halloween show this week. My wife Pam and I created some clips for it, and host/creator Jeff Kelley always cooks up some spooky fun.

Book Signing. Local author Susan Kaye Quinn will be signing copies of her new book Open Minds next Saturday, November 5th from 10 AM to noon at the Caribou Coffee in Palatine, 581 E. Dundee Road. The paranormal tale is book one of Quinn’s Mindjack Trilogy.

Thanks for the plug! And OMG the Elgin Zombie Defense Initiative!! That is AWESOME! Please tell me you're going to post that video after the event??