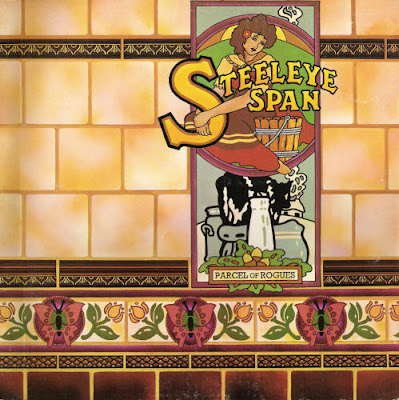 This profile already appeared in Broken Hearted Toy in 2009 and 2010, but since I’m using weekends in October to post spooky reruns, I figured it was okay. And if there's anyone out there actually reading this for the third time, thanks for being a loyal follower!

Steeleye Span is known for updating centuries-old ballads with modern, electric arrangements. Such is the case with “Alison Gross” from the band’s 1973 release, Parcel Of Rogues. It spins the tale of a witch who believes the way to a man’s heart is through bribery. She tries to woo a potential lover by offering him a series of riches, but he’s so repulsed by her appearance, he screams, “Away, away, you ugly witch/Go far away and let me be/I never would kiss your ugly mouth/For all of the gifts that you give to me.” Infuriated, Alison Gross waves a magic wand and turns him into a worm.

According to Wikipedia, Steeleye Span added its own chorus and left off the original ballad’s happy ending, which had the man being restored to his proper shape on Halloween by a passing fairy. Also, he may not have been transformed to an earthworm, since the original lyrics used the word wyrm, which meant dragon. Unlike some of the ancient ballads, which can be slow and gloomy, “Alison Gross” feels like a rowdy party song villagers might have sung while swinging steins of mead.