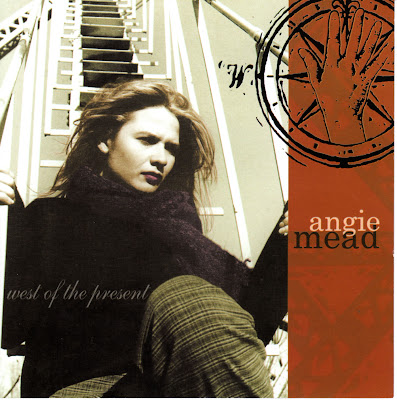 Angie Mead recorded two versions of the song “You Leave” for her impressive 1999 debut CD, West Of The Present. The first was an emotional ballad built on acoustic guitar, strings, and Mead’s strong but beautiful vocals. The lyrics, which depict a woman who has been spurned by either a lover or friend, are ominous but blend in with the well-crafted arrangement.

On “You Leave (12:04 Remix),” Mead transforms the song into a nightmare but moving the lyrics front and center and delivering them in a raspy whisper. It’s scary in a Play Misty For Me vein rather than anything supernatural. The 12:04 in the title seems to be the time of night the woman makes a phone call. Initially, her barely audible voice sounds sexy, but then ominous strings and percussion roll in like dark clouds, and the woman becomes a stalker.

“Hey I know you see me walk by,” Mead sings. “You see me in the corner of your eye.” It’s not clear what type of a relationship the woman had with recipient of her call, but one way or another it’s over. “Hey I know it’s been a while/You didn’t recognize me with a smile.” And there isn’t a trace of affection in Mead’s tone when she observes, “Hey my friend look what you’re doing to me.” The tension escalates until the caller finally suggests, “So let me kick you around for a while/let me bring you down.” Mead drags out the last word, a whispered threat that seems more unnerving than if she had screamed it.