CD Review: The Handcuffs - Waiting For The Robot 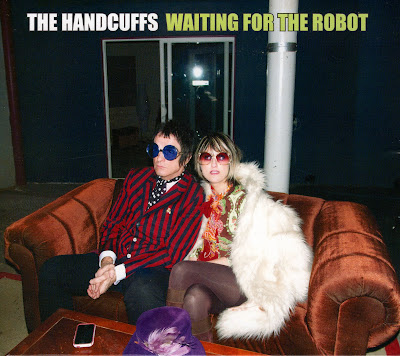 Bangles Alert! The band will be performing on Good Morning America tomorrow. They have a gig at The House Of Blues in Chicago a week from today.

The Handcuffs will be playing songs from their new CD this Saturday night at Kryptonite in Rockford and they’ll be sharing the bill with former Stranglers vocalist-guitarist Hugh Cornwell on Halloween night at Reggies in Chicago. Note: The following review originally appeared in the Illinois Entertainer.

The latest effort from the husband of wife team of Brad Elvis and Chloe F. Orwell finds their musical partnership stronger than ever. He’s a hard-hitting drummer who composes catchy rock tunes, and she’s a singer-guitarist who belts them out with sass and versatility. Waiting For The Robot is their most ambitious effort yet (including their Big Hello releases) but maintains a fun, party spirit.

Elvis, whose resume includes time with Screams and of course The Elvis Brothers, exudes a quirky sense of humor on “Vinyl Isabella,” a glam rock tribute to a drag queen, and on the silly but engaging “Everybody Waves Hello.” But he also taps into more complex emotions on the Beatlesque “Miss You On Tuesday” and the intriguing “The Scary Side Of Me.” Ellis Clark, another music veteran, contributes impressive guitar and piano playing throughout. That said, Orwell stands front and center on Robot, whether she’s channeling Deborah Harry while trashing an ex-boyfriend on “Kiss This Goodbye,” or feeling the strain of a relationship coming apart on “Eight Down.”

Index: The Bangles, The Handcuffs