CD Review: The Bangles - Sweetheart Of The Sun 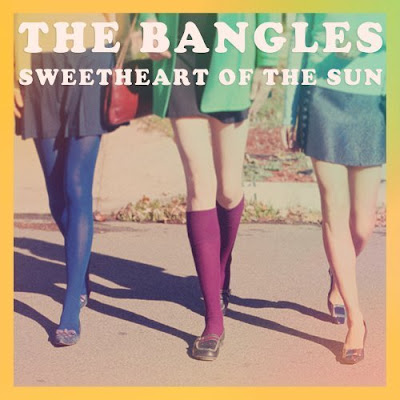 Bangles Alert: Hopefully it’s not too late to let people know that the band will be performing on Jimmy Kimmel Live! later tonight. Here’s the review I did for the Illinois Entertainer of The Bangles’ latest CD.

The Bangles have been playing by their own rules since reuniting at the turn of the century, and their latest CD, Sweetheart Of The Sun, reflects that attitude. Susanna Hoffs, Vicki Peterson, and Debbi Peterson (Michael Steele split a few years back) seem even less concerned about what’s currently topping the charts than they did on 2003’s underrated Doll Revolution. That’s bad news for anyone hoping for another “Eternal Flame” but good news for the group’s real fans.

The more adventurous stuff here includes “Ball ‘N’ Chain,” a rockabilly flavored series of putdowns toward an ex-lover, and a deliberately disjointed take on the obscure McKinley Sisters’ tune, “Sweet And Tender Romance.” The melodic title track honors pioneering singer-songwriters like Carly Simon and Joni Mitchell, while the aptly-titled “Mesmerized” mixes elaborate vocal interplay within a dreamy psychedelic arrangement. The light and acoustic “Through Your Eyes,” with its gorgeous harmonies, is followed by a blast of garage rock as The Bangles close Sweetheart with an authentic cover of Nazz’s “Open My Eyes.”