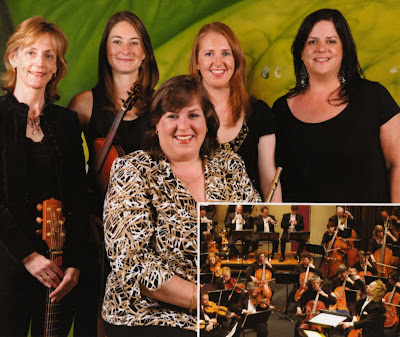 It was over 25 years ago when the renowned musician Mick Maloney suggested to penny whistle and flute player Joannie Madden that she form a band that would celebrate the Irish tradition of fathers passing their musical talent and knowledge on to their daughters. His idea for an all-woman Celtic band resulted in Cherish The Ladies. A short time later, they were performing in Ireland, where a local official introduced them as Worship The Women.

That amusing tale was one of many spun by Madden during a Cherish The Ladies performance last Saturday night at the McAninch Arts Center at the College of Dupage. At this point, she and guitarist Mary Coogan are the only original members left, but as always, the group featured top notch musicians. Long time fans are accustomed to Madden’s sense of humor and gift of gab, but the McAninch show offered something many haven’t seen before, which was Cherish The Ladies backed by a full orchestra. The situation wasn’t new to the group; Cherish The Ladies performed with The Boston Pops on The Celtic Album, which was nominated for a Grammy award.

New Philharmonic, with Kirk Muspratt as its music director and conductor, also has an impressive reputation, so the St. Patrick’s Day weekend concert provided an entertaining blend of musical talents. Muspratt, who was dubbed by Chicago Tribune critic John von Rhein as Chicagoan Of The Year in classical music, is a charismatic leader whose infectious sense of humor has traces of Tom Hulce’s portrayal of Mozart in Amadeus.

New Philharmonic opened the show with a rousing performance of composer Leroy Anderson’s Irish Suite. Malcolm Arnold’s piece, Four Scottish Dances, which Muspratt explained was okay for a St. Patrick’s Day celebration since the Scottish and Irish are both Celtic, came next, followed by Gerard Fahy’s “Magh Scola.” Madden joined the orchestra for Jerry Lackey’s “Irish Dance” just before Intermission.

The second half of the show brought Cherish The Ladies front and center, which offered another pleasant surprise in the return of vocalist Deirdre Connolly. Connolly had served as the lead singer on the ambitious 2001 release, The Girls Won’t Leave The Boys Alone, but hadn’t performed live with the group in some time. In addition to Connolly, Madden, and Coogan, the current Cherish The Ladies lineup includes accordion player Mirella Murray, fiddle player Grainne Murphy, and piano player Kathleen Boyle. With accompaniment from New Philharmonic, the women played a mix of instrumentals and ballads, including old favorites like “The Ballad Of The Foxhunter” and “High Germany.”

The evening also featured Stratford, Ontario fiddle player Dan Stacey, who doubled as a first rate step-dancer. A coed quartet of step-dancers augmented the music from time to time, and along with Stacey, helped Cherish The Ladies and New Philharmonic close with a high energy flourish. Afterward, the six women met with appreciative (worshiping?) fans in the lobby, along with Muspratt and the shamrock decorated treats he had promised throughout the performance.