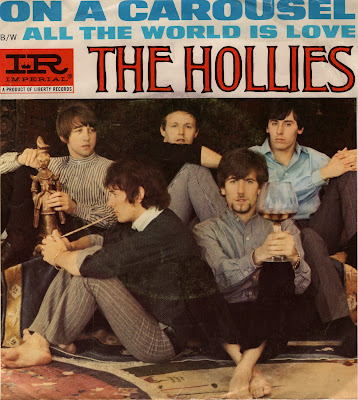 I’ve mentioned The Second Disc before, but it really is worth signing up to receive regular updates from this reissues-obsessed blog. An email I received yesterday immediately caught my attention with an opening line that proclaimed, “It’s Hollies-mania all over again!” The reason for this excitement is a new crop of Hollies-related reissues and box sets. The Second Disc reports that April 19th will see the release of a vinyl box set of the band’s rarities, as well as the Lost Recordings And Beat Rarities CD box set on the Sundazed label. Hollies fans can also look for vinyl reissues of the 1966 Imperial albums, Beat Group and Bus Stop. BGO Records is also set to release a disc that combines the 1964 release Here I Go Again with the 1965 release Hear! Here! The Second Disc has also recently provided news on reissues by Neil Diamond, Simon & Garfunkel, and The Beach Boys’ long lost SMiLE album.

Singer Cliff Johnson and his current band will be digging into the Off Broadway treasure chest of power pop gems for an Off Broadway Redux gig scheduled at the Nitecap Lounge on April 2nd. Johnson will be performing some of his newer stuff as well. The Nitecap Lounge is located at 5007 W. Irving Park Road in Chicago. The show starts at 9:30.

Tres-Tres, a new band on the Chicago scene, has just released its debut effort, Romantic Propaganda. The group describes its music as power pop for moderns, and the consistently clever lyrics are packed with references to several high-tech devices. The well-polished vocals and arrangements call to mind The Outfield, but at times they’re a bit too commercial for my tastes. “Holly Says Go,” a fun tale about hanging out with trendy gal whose hot looks get her into any club she wants, and the catchy “Ashley Chase” are the best tracks. Romantic Propaganda definitely sounds like a hit record, but I’d like Tres-Tres more if they threw out the rule book and played a little rougher.

A trio of improv groups at The Playground Theater are plenty excited about the second annual Chicago Comic & Entertainment Expo, also known as C2E2. On Friday, March 18th, The Fling, International Stinger, and The Tweet Life will be aiming for an entire evening’s worth of laughs “dedicated to and inspired by the awesomeness that is C2E2.” The Tweet Life’s performance will be based on the Twitter musings of comic book writer Warren Ellis. The show kicks off at 8:00 PM. Tickets for the BYOB event are $10. The Playground Theater is offering visitors to its website a chance to win weekend passes to C2E2.

Most of the visitors to The Chicago Comic & Entertainment Expo, which is coming to the West Building at McCormick Place March 18th - 20th, will probably stop by the Tonner exhibit. The company makes lifelike dolls and figures of celebrities, and has hit on an interesting method for getting the word out about its products. It’s now possible to become Facebook friends with Andy Mills, Cami Malone, and Jonquil Parker - - a trio of impeccably dressed dolls who hang out in Manhattan; seeing the latest hit musicals, visiting museums, and planning elegant social events. If you don’t mind inanimate objects having more fun than you ever do, you might want to Like them on Facebook.

WXRT DJ Tom Marker posted a blog on the station’s website this week with the news that Garbage may be planning to release a CD of new material within the coming months. A new tune called “The Hunger,” featuring Garbage front woman Shirley Manson on vocals, is available on iTunes, with the profits going to help Amnesty International. The song is from the musical Prometheus Bound.

Thomas Conner, the Sun-Times music critic noted in yesterday’s edition that this year’s Ravinia schedule leans heavily toward pleasing Baby Boomers. Several classic rock acts will be performing, including Robert Plant, Deep Purple, The Moody Blues, Doobie Brothers, Steely Dan, Peter Frampton, and Lynyrd Skynyrd. The most intriguing date for me is the double bill of The Go-Go’s and The B-52’s. When last heard from, The Go-Go’s had aborted a farewell tour last year due to a Jane Wiedlin injury. I'm wondering if the Ravinia date is part of a new swan song, or if the girls have decided to stick around for a while. Here’s hoping it’s the latter.

James Moeller and Carla Hayden, founders of Black Forest Theatre as well as members of the WhiteWolfSonicPrincess alt-rock band, have unveiled a new venture dubbed Black Forest Design. The company will provide clients with website design, web application development, graphic arts, and other services. For more information, send an email to jamesblackforest@yahoo.com

The Rock And Roll Hall Of Fame is selling new t shirts and mugs to help promote the 2011 Inductees. This year’s ceremony, honoring Alice Cooper, Neil Diamond, Dr. John, Darlene Love, and Tom Waits, will be held on March 14th at the Waldorf Astoria in New York. The show will be broadcast on Fuse.