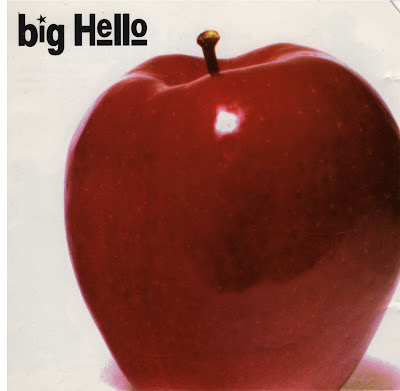 While we wait for the new CD from The Handcuffs, here’s a look back at the first band fronted by the husband and wife team of drummer Brad Elvis and singer-guitarist Chloe F. Orwell. This review of Big Hello’s Apple Album originally appeared in the Illinois Entertainer back in 1998.

Brad Elvis recorded three albums of exuberant pop songs with The Elvis Brothers, and he continues his successful streak with Big Hello’s debut, Apple Album. A hard-hitting drummer who bears a slight resemblance to Austin Powers, Elvis draws upon British Invasion and 1960s girl groups for inspiration. He may no longer have stage siblings Brad and Rob around, but he’s found a worthy successor in Chloe F. Orwell, a first-rate vocalist and songwriter.

Orwell’s energetic “Oh Canada” kicks things off nicely, and her winsome “I Don’t Like You” would have fit in perfectly on the soundtrack for That Thing You Do. Johhny Million provides guitar firepower throughout the CD, and he also wrote the catchy “Hooked On The Girl.” Bass player j.a.c.k.i.e. often joins Million on harmony vocals.

Brad Elvis consistently supplies fresh, engaging material like “Star 69” and “Colorado Coastline.” The songs “Today Will Be Yesterday Tomorrow” and “Pen Pal” rock a little harder, while “Sister Mary” taps into mid-1960s Beatles. Fans who miss The Elvis Brothers will be glad to discover that the fun lives on in Big Hello.

Index: The Elvis Brothers, The Handcuffs