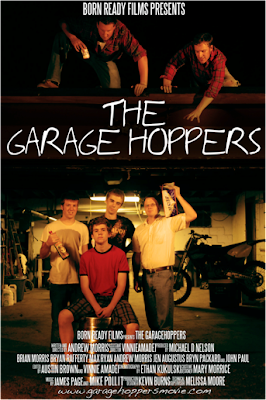 Born Ready Films will hold the premiere of their full-length movie The Garage Hoppers tonight at The Portage Theatre on Milwaukee Avenue in Chicago. Written and directed by Andrew Morris, who is also one of the cast members, the film takes its plot from the current crime wave of kids breaking into garages to steal liquor. The title characters not only steal the booze, they run a lucrative business selling it to their friends. They have no trouble contending with a rival gang of hooch-grabbers on rollerblades, but run into trouble after snatching the last two beers from a garage owned by two deranged hillbillies. A pair of kidnappings and other mayhem cause the two gangs to join forces.

In addition to Andrew Morris, the cast includes Brian Morris, Max Ryan, Bryan Rafferty, and Jennifer Augustus. Bryn Packard, a funny guy who performed with my former comedy group Famous In The Future for a few years, also appears in the film. Tonight will be the only opportunity to see The Garage Hoppers for at least a few months, and DVD’s are not available yet. Other short films will be shown as well. The Portage Theatre is located at 4050 N. Milwaukee Avenue.

David Bash, who’ll be bringing International Pop Overthrow to Chicago next month, is a published rock critic as well as a promoter. He recently posted on Facebook that he just learned of a six-disc Hollies box set titled The Clarke, Hicks & Nash Years that will be released on the EMI label May 9th. Of course, avid Hollies fans will already have most of the songs, but Bash says that there will be at least one previously unreleased track - - a live performance recorded back in 1968. Further details to come.

The dB’s will be releasing the 45 “Picture Sleeve”/“Write Back” on April 16th for Record Store Day. The band has also completed its new CD and will have news about its release in the near future. dB’s founder Chris Stamey is organizing a second live performance of Big Star’s Third/Sister Lovers (the first was in Chapel Hill, NC) for March 26th at Mason Hall in New York. Participants include Stamey, Will Rigby, Mitch Easter, Mike Mills, Matthew Sweet, Tift Merritt, Jody Stephens, and Don Dixon’s daughter, Sydney Dixon.

Ground Zero blog has a post from L. Kent Wolgamott of the Lincoln Journal Star that covers The Bangles’ recent SXSW live show at the Cedar Street Courtyard. While some critics had dismissed the band’s inclusion on the schedule as shameless nostalgia, Wolgamott feels the performance at this “jam-packed” gig was better than he remembered. He doesn’t elaborate on the last time he saw them. Surprisingly, The Bangles didn’t play any of the new tracks from their forthcoming CD.

Index: The Bangles, The Hollies