CD Review: The Interpreters - Back In The U.S.S.A. 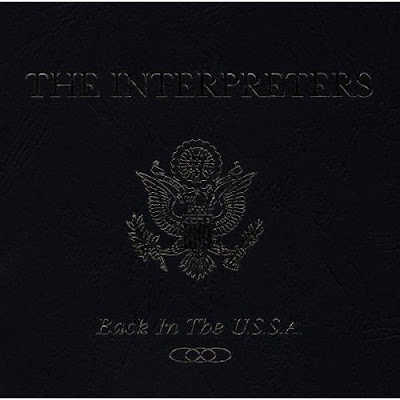 Note: This review originally appeared in the Illinois Entertainer in 1998.

The Interpreters are so fluent in early ‘80s Brit punk and new wave, they could hit the club circuit as a tribute band for The Cure. Fortunately, these New Jersey-based lads exude enough original fun and energy to make each song uniquely their own. Almost all of Back In The U.S.S.A.’s 16 tracks are under three minutes long, but true to the group’s clever espionage motif, they’re action-packed.

Vocalist-bassist Herschel Gaer sounds identical to The Cure’s Robert Smith on the catchy punk rock of “Sellers” and “Uptight.” He maintains an engaging presence throughout the album while guitarist Patsy Palladino and drummer Brankominich add infectious energy as back-up singers, particularly during the freewheeling vocal interplay of “Glorious.” “Today And Every Day” combines heavenly harmonies and frenetic guitar strumming for one of U.S.S.A.’s most ambitious tracks. From start to finish, this impressive debut translates into pure fun.