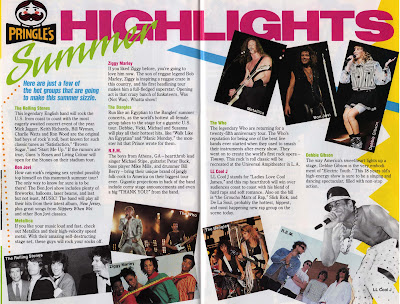 These days, if you’re fond of any particular product, you can go to the company’s Facebook page and click on the Like button. For example, I Like Natural Ovens bread, Shindig magazine, Pepsi Throwback, Trader Joe’s supermarkets, and Sweet Tomatoes buffet restaurants. Think any of these places will send me some freebies for plugging them? Probably not.

Back in 1989 though, if you were a potato chip company looking to get your name out in front of thousands of cash-spending youngsters, you sponsored a magazine. And so, the Pringle’s Presents Billboard’s Summer Preview ‘89 was born. I can’t remember exactly, but I have a hunch this neon colored, multi-photograph publication was tucked inside some other mag, probably Rolling Stone. The eight-page guide covered a wide range of touring acts via brief but enthusiastic profiles. A page on rock fashion described Madonna as, “one part drama, one part romance. And all fantasy” Debbie Gibson was a “bouncy Long Island native” who always topped off her outfits with a great hat.

Other pages concentrated on the music. Readers were advised to “run like an Egyptian to The Bangles’ summer concerts, as the world’s hottest all-female group takes to the stage for a gigantic U.S. tour.” R.E.M. were “the boys from Athens, GA -- heartthrob lead singer Michael Stipe, guitarist Peter Buck, bass player Mike Mills, and drummer Bill Berry.” The legendary Who were returning for a 25th anniversary tour, and The Rolling Stones, who were also deemed legendary, were going to “rock the U.S. from coast to coast with the most eagerly awaited concert event of the year.”

Other glowing profiles in the Pringle’s guide covered Bon Jovi, Metallica, Ziggy Marley, LL Cool J, Midnight Oil, Tiffany, Fine Young Cannibals, and Poison. The Summer’s Past page (their grammar, not mine) listed hit songs from previous years, and included one of the silliest-looking photos of U2 ever published. To Pringle’s credit, there isn’t a single ad in the guide, although the company’s logo is on almost half the pages. By the way, 9,488, 473 people Like Pringle’s on Facebook.