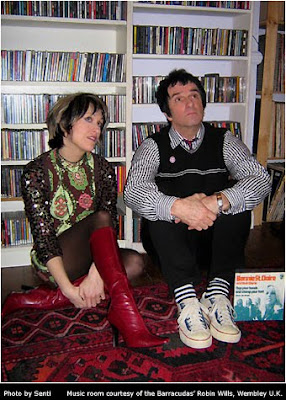 Two Girls For Every Guy. Chloe F. Orwell, singer-guitarist for The Handcuffs, has been promising on Facebook that there will be a lot more girls than guys on stage at Quenchers Saloon tomorrow night when her band plays a triple bill with The Maybenauts and The Wanton Looks. The evening will also be a great opportunity to catch some energetic indie rock. The Handcuffs, led by Orwell and drummer Brad Elvis, have recorded two solid CDs, and are on the verge of releasing their third. Co-ed rockers The Maybenauts just released the very fun Big Bang EP, and The Wanton Looks are a hard-hitting four-woman band with great hooks and harmonies. The show starts at 9:30PM.

The IPO Play At Home Game. The entire schedule for International Pop Overthrow - Chicago 20011 is now up on the fest’s website. I can’t go into too much detail now, because I’ll be doing an online preview again this year for the Illinois Entertainer. But I can suggest a fun game for anyone who’s interested in power pop and indie rock music. Just pick one of the more intriguing band names listed on schedule, and do a quick Google search on it. Usually, the group’s MySpace page will be one of the first choices. Check it out, and chances are you’ll discover some new music you’ll really like. Then try another act, and another, and so on.

You can even put on a cowboy hat and pretend your IPO honcho David Bash, since he once told me that checking out MySpace pages is one of his chief methods for choosing acts. If you live in the Chicago area, be sure to check out the IPO showcases where you can see these bands perform live. Those living elsewhere can consider downloading a band’s songs or going the old-fashioned route and buying an actual CD.

Sad News. “I Had Too Much To Dream” by The Electric Prunes was one of those songs I loved from the first moment I heard in on WLS radio back in the 1960s. So it’s sad to note that the band’s bassist, Mark Tulin recently passed away.

I’m Too Sixties For My Shirt. The latest edition of The Hollies Carousel newsletter arrived in the mail, with its usual roundup of news items, concert reviews, and fans’ correspondence. One fan, while writing about the St. Albans Arena show, noted that there were new Hollies t shirts for sale. This is an interesting development since I don’t think there’s been an official Hollies t shirt since the 1983 reunion tour with Graham Nash. (Unless you count an unimaginative white one with the band’s name in red letters that was made for the 2000 Hollies Convention in Eastbourne. I believe that was the shirt I was wearing when I met Carl Wayne just before a concert in Minnesota in 2002.)

Judging from a photo of guitarist Tony Hicks wearing one of the new shirts on stage, it’s a proper t shirt with actual art, showing silhouettes of the current band members. Rob Haywood, from the Hollies Official website (where I had purchased the Eastbourne t shirt), responded to my urgent e-mail inquiry by assuring me that he hopes to have the shirts available online in the very near future.

Shamrocking In Palatine. My sedate home town of Palatine will be holding its first ever St. Patrick’s Day Parade on March 12th, along with an Irish Market by the Metra Station, and a line-up of entertainment at Durty Nellie’s. The rock club has plenty of experience when it comes to commemorating the Irish holiday, dating back to the days of its old location, when it booked first-rate band like McTavish and The Chicago Rovers. I can’t say I’m familiar with the acts lined up for this year - - Flatfoot 56, Rod Tuffcurls & Bench Press, Black Cadillac, and the popular cover act Wedding Banned - - but hopefully, they’ll be fun.

There’ll Be None Of That On My Blog. I deliberately avoided using Irish jargon in the above item, figuring I’d leave that to the 95 year-old men who write the bulk of America’s radio commercials. Every March, there’s another batch of atrocious attempts at Irish accents, particularly on ads for McDonalds, but the current commercial for the Illinois State Lottery’s St. Patrick’s Day Millionaire Raffle sets a new low. The premise of a customer immediately becoming Irish after buying the ticket is hokey enough, but the actor’s strained attempts at a brogue are further hampered by a script that has him using the distinctively British slang words “bloody” and “blimey.”