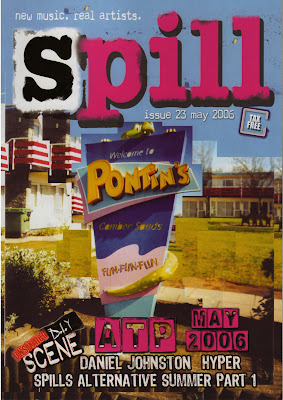 I’ve never been much of a globetrotter, so when my wife Pam and I took a three-week European vacation in 2006, we knew it would be the trip of a lifetime. We weren’t disappointed. One of my many goals for that adventure was to pick up some music and entertainment publications from each of the countries we would be visiting.

My obsession with foreign rock magazines stretches back to the early 1970s when I first heard tales of a mystical British paper called Melody Maker that could only be found in Chicago at the coolest stores downtown or on the north side. I checked out a lot of places and drew a lot of blank stares from salespeople before finally finding a source for Melody Maker, as well as New Musical Express.

These days, Borders and Barnes & Noble carry Mojo, Q, Uncut, Shindig, and numerous other UK magazines. But the quest lived on. I knew there had to be other Illinois Entertainer/Reader type publications that never made it across the ocean. So whenever friends or relatives were about to go on a trip to England, I would request that they bring me back a local entertainment paper. And everyone of those people failed. They would tell they looked, but just couldn’t find anything like that.

Then it was my turn to travel abroad, and I was as determined as Marco Polo to bring back those periodical treasures. At the time, Pam worked with Dave Metzger, a graphic artist who would later do a bang-up job playing my deranged, button-seeking nemesis on Manchester Gallery. She asked him if there was anything he wanted her to bring back from Europe, and he requested some local free papers that would like The Reader or the Illinois Entertainer. So now, I would be hunting for both of us.

Within the first few days, I had collected so many local papers, I decided to ship them back to the States. A worker at a London post office looked at me like I was crazy, explaining that I would be paying about $80 in American money just to send a bunch of free papers back home. I decided that I would only mail the ceramic mug I had purchased at the Royal Air Force Museum, and lug all those free publications around Europe for the next few weeks.

I found Spill in a great record store called FOPP in the quaint town of Bath, of all places. Usually tourists flock to Bath because of its historical importance; it had once been ruled by the Romans, who worshipped one of their deities there. Visitors also come for the trendy shopping area, which in 2006 included two FOPP locations. I loved the store so much, I asked if they sold t shirts. They were out at the moment, and I found out later that I probably wouldn’t have bought one anyway because it had a violent graphic design on the front.

Unfortunately, Spill went under in December of that same year. The farewell messages from its staff can still be viewed on the website. Chris Dempsey served as its Managing Editor, and Dominique Czopor was its Creative Editor. I have to admit I’m not familiar with a number of the names featured in the May issue I acquired. Bands like Tiscali and Turbo Audio, and the singer Nerina Pallot, but part of the fun of getting a local paper is being introduced to new stuff.

Spill even had an Around Hear-like column for local musicians, called Unsigned D.I.Y. Scene Demos. Reviewer Suzie Ireland described artist Sicknote as “A crazy-assed nutjob indeed!” while Peter Hitchings employed medical metaphors in his take on the band Glassglue: “Four crazed surgeons spaz out in the operating theatre. - - - One listen will change your existence. You will not enjoy your time in the hospital.”

There were more internationally known artists in the New Releases section, such as Matisyahu, Thievery Corporation, Paramore, and The Black Heart Procession. The back page ad promoted Guilfest 2006, a three day festival in Stoke Park, Guildford that featured The Wonder Stuff, Lightning Seeds, Gary Numan, The Stranglers, Sparks, and Stereo MC’s. The colorful graphics throughout the magazine were eye-catching, while the writing was hip and clever. I’m sure Spill’s passing was lamented in the UK, but at least one issue lives on in my collection.