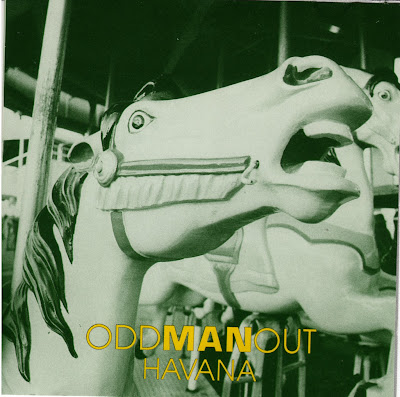 Note: Not only do I need to point out that this review originally appeared in the Illinois Entertainer in 1990, but in full disclosure, I should add that Odd Man Out lead vocalist John Vernon was a staff member of the publication back then and is now its publisher. Still, I can attest that this was and still is an unbiased review of an impressive debut CD. Unfortunately, as far as I know, it was the only effort from the band.

Odd Man Out’s artful blend of acoustic guitars and synthesizers is sure to please anyone who’s into the Depeche Mode or New Order. A Chicago-based group that started by playing the Illinois college circuit, Odd Man Out creates enough atmosphere and catchy melodies on Havana to make it one of the most impressive local releases so far this year.

The eight-song CD features keyboards player Chris Hall building walls of sound via piano and synthesizer while adding quirky instrumental touches like the harmonica solo that opens “India Divided.” Guitarist Jerry Hinck is another essential component, and the rhythm section of Jeff Strohm on bass and Mike Yockey on drums packs a bigger wallop then what you’d expect from a techno-pop band. Lead vocalist John Vernon has more that enough power to keep his voice above the ethereal mix.

Havana has a number of dance-oriented cuts, the best of which is “Breathe,” which benefits from some particularly fluid synthesizer work from Hall. Other songs that should do well on the club scene include the title track and “Water.”

Great band, great CD (or in my case cassette). I wish I had some way to play it!