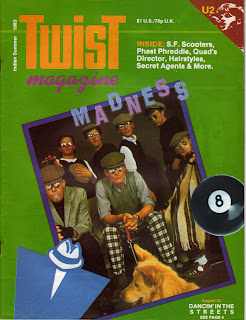 This Mod-inspired periodical came from Los Angeles and was published in the Fall of 1983. At this point I have no recollection of how I came to possess it, but I probably bought it from one of the record stores I frequented on Chicago’s north side. To this day, they (the few that are left) carry magazines from around the world.

Twist was published by Dave Lumian and its editor was Phillip Cramer, who worked with a staff of six, plus several contributing writers and photographers. Madness is on the front cover, and there’s a three page interview with them conducted by Lumian. Note that all of the band members are wearing what my younger brother and I called Mack hats when we were kids. We called them that because we thought anybody who wore one was named Mack. The article is accompanied by some eye-popping graphics, and throughout its 40 pages, Twist exudes a fun, artsy ambience.

Writer Margy Rochlin has an interview with Franc Roddam, who directed and co-wrote the film version of The Who’s Quadrophenia. Mark Johnson’s London Calling column offers a British point of view as he compares the nascent U.S. Mod scene to the more entrenched one in England. This issue also features Jeff Spurrier’s interview with U2, and a DJ profile of Clyde Grimes from the O.N. Klub under the heading Aces At The Controls. There’s a two page photo spread about San Francisco scooter riders and another photo spread on hair and make-up. Gregory Dobbins’s License To Kill looks back at fictional spies from the James Bond films, The Man From U.N.C.L.E., I Spy, and The Avengers.

The ads for vintage clothing stores, surfboards, dance parties, clubs, and hair salons are almost as interesting as the articles. In short, Twist had everything a Mod could need.