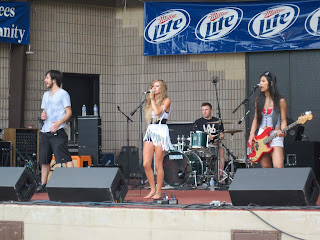 Sometime back in the early 1990s, my comedy group Famous In The Future performed before a particularly unresponsive audience at a club in Chicago. Afterward, the brother of one of our cast members told him how much he had enjoyed the show. “I didn’t hear you laughing at all,” the actor noted. “No, but I was grinning a lot,” his brother said.

That incident came to mind after watching local band Your Villain My Hero perform an outdoor concert Sunday afternoon as part of the Jaycees’ Hometown Fest in Palatine. The band has been building momentum on the club scene by playing covers of hip-hop and rap songs and has two top notch singers in Mig Mora and Jenny Lee. Your Villain My Hero has a recorded a video for an original tune called “I Don’t Need A Boyfriend,” which can be seen on its MySpace page and YouTube.

Due to the time of day, the threatening weather, and the fact that a lot of people had other things to do on the holiday, the band was playing to an audience of about 30 people sitting in lawn chairs. It’s one thing for mellow artists like James Taylor and Carole King to do an outdoor show and see people lounging about, but when you’re a band belting out Pink’s “So What” and “Boom Boom Pow” by Black Eyed Peas, it’s got to be discouraging.

To their credit, the band members kept their sense of humor about the whole thing. “This isn’t going to work,” Mora teased the audience toward the end of the concert. His point was that the band was about to play a highly energetic song and the audience would “just look silly” if they didn’t get up and start shaking their butts. That succeeded in getting at least some of the crowd, including a couple of party dudes close to the stage; some teenage girls; and a Dad trying to impress his kids, to start jumping around.

So here’s a thank you to Your Villain My Hero for an enjoyable concert, and a reassurance to bands every where that while some audience members might not be dancing, they could still be having fun.

Index: Your Villain My Hero