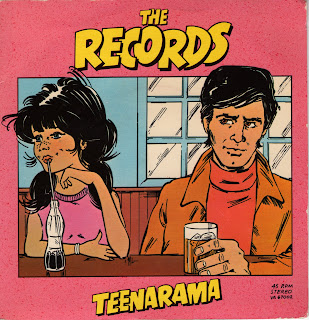 I’m currently working on a review of a CD compilation by The Undertones for the Illinois Entertainer. While listening to their frenetic but highly melodic “Teenage Kicks,” I realized that I sometimes get it confused with this record. Several years ago, I made a mixed tape where “Teenage Kicks” followed after “Teenarama,” and by now the two songs are fused together in my mind.

While “Teenage Kicks” is a celebration of youthful adventures from a teen’s point of view, “Teenarama” takes a more voyeuristic angle. “Ca-ca-ca -cola is all you ever drink,” lead vocalist-guitarist John Wicks marvels. “The way you smile, the way you wink.” This girl’s unhealthy diet is somehow tied to her appeal, because Wicks later adds, “Sugar candy is all you ever eat./You’re so skinny, you’re so sweet.”

“Teenarama” was written by Wicks and the band’s drummer, Will Birch, who gives the song its hard-hitting beat. Taken from The Records’ self-titled debut in 1979, it fits perfectly in an era that gave us The Knack’s “My Sharona” and The Romantics’ “What I Like About You.” The power pop arrangement is driven by guitars, and Wicks harmonizes beautifully with guitarist Huw Gower and bassist Phil Brown, particularly on the chorus of, “Teenarama, and all of that melodrama./Gimme gimme gimme that Teenarama.”

The B-side, “Held Up High,” is a non-LP track, also written by Wicks and Birch. The soaring harmonies and Brown’s adventurous bass playing add to this appealing song’s psychedelic ambience.

The Abbeys and other stuff said...

These guys were/are a priceless gem in the powerpop genre...and John Wicks is a really great guy.