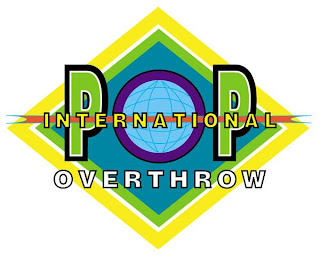 Each Spring, power pop fans in the Chicago area begin dreaming of the joy concert promoter David Bash will bring them when International Pop Overthrow comes for its annual visit in April. The globe trotting showcase of energetic and melodic performers also visits Milwaukee, Detroit, San Diego, Vancouver, Liverpool, and other cities.The lineup is different for each location.

It all started in Los Angeles 13 years ago. I.P.O. returns to the city of its birth for a 19-day run, starting tomorrow night with eight bands at The Joynt. Over the next few weeks, Bash will stage multi-act shows at Fais Do Do, The Cat Club, Spaceland, Molly Malone’s, Fitzgerald’s, The Echo, and The Echoplex. On Saturday, August 1st, there will be an I.P.O. morning/afternoon event at the Orange County Fair in Costa Mesa.

Looking over the schedule, which can be found online, the only bands I’m familiar with are The Singles, who play authentic 1960s style pop on CDs like Better Than Before; sparkle*jets u.k., who have contributed imaginative and fun tracks to albums like Substitution Mass Confusion - A Tribute To The Cars,; and singer-guitarist Jeremy, who has logged some impressive I.P.O. gigs in Chicago. Still, one of the benefits of attending International Pop Overthrow is giving previously unfamiliar acts a chance to become new favorites.

For example, Maple Mars, who just released their Galaxyland CD, sound pretty promising, based on the dreamy psychedelic songs on their MySpace page. The band lists The Zombies, The Hollies, The Move, and The Kinks as major influences. Sitcom Neighbor is a clever name for a band, and song titles like “Accidental Suicide” provide further evidence that these guys, who claim ABBA and Zappa as influences, have a sense of humor. Omaha, Nebraska’s The Beat Seekers evoke vintage Elvis Costello on songs like “Dead Air Radio” and “Lipstick Crush Delight,” although their motto is “There’s no niche like no niche.”

There’s a trio of interesting acts discovered with just a bit of Internet research. Imagine how much more fun they’ll sound live. So, people of Los Angeles, get out to International Pop Overthrow and enjoy lots of exciting new bands. And tell David Bash, Chicago says hello.

P.S. MY REVIEW OF LILITH FAIR IN CHICAGO IS NOW ONLINE AT THE ILLINOIS ENTERTAINER.