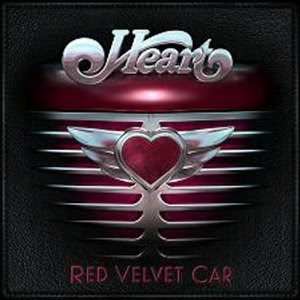 Heart On The Line. Record Store Day is reporting on Facebook that Ann and Nancy Wilson of Heart, who were so impressive at Lilith Fair Chicago, have released a heart-shaped vinyl single with the new song “WTF” and a live recording of “Magic Man.” It’s available at select record stores. That is, if you can find a record store. Or you can order a copy at the band’s website. That’s also where fans can watch a brief video of the Wilsons expressing their love and gratitude for indie record stores for their continued support. Red Velvet Car, Heart’s all-new CD, will be released on August 31st.

Deep Fried Power Curds. Chicago power pop band The Bradburys will travel a bit north tomorrow to perform at The Taste Of Wisconsin in Kenosha. They’ll be on the Snap-On Stage from 8:00 PM to 10:00 PM.

Just The Two Of Us. WhiteWolfSonicPrincess is doing an acoustic show featuring founding members James Moeller on guitar and vocals and Carla Hayden on vocals and shaker at The Upstairs Lounge at The Elbo Room on Lincoln Avenue Saturday night, July 31st. Show starts at 9:00PM.

When The Rain Comes. Beatles fans, don’t forget the American English outdoor concert originally scheduled for the Fred P. Hall Amphitheatre in Palatine this past June, will take place on Tuesday, August 3rd. That is, unless it gets rained out again. Rain won’t be a factor at The Beatles Celebration at the Old Town School of Folk Music tomorrow night. It’s a benefit for the Brendan Hedges Scholarship fund.

Hot Fun In The Summertime. The Handcuffs continue their series of outdoor performances this Sunday, with a 12:30 PM gig at The Lincoln Park Arts & Music Festival, on Racine, between Fullerton and Webster. Drummer Brad Elvis also has some upcoming gigs as a member of The Romantics.

Swirling With The King. Paul Collins’ new effort, The King Of Power Pop, which will be released in August, features Collins, along with Nikki Corvette and Wally Palmar of The Romantics. Five hundred copies of a limited edition will also be released on swirled vinyl. The CD and the record, as well as a CD/record bundle, can be ordered at www.bompstore.com

Nerks On Film. “Either Way,” the catchy title track of the Nerk Twins’ 1997 CD, will be used in the independent film Inventory, which will be released soon and start making the rounds at film festivals. Taking their name from early Beatles lore, The Nerk Twins were comprised of guitarist-vocalist Jeff Murphy of Shoes, and guitarist-vocalist Herb Eimerman, who recorded solo CDs, and is now part of the international power pop trio, The Britannicas.

The 'Zine Scene. The Printers Ball, an annual celebration of indie media, will be held from 6:00 PM to 11:00 PM tonight at The Ludington Building at 1104 South Wabash in downtown Chicago. There’s no admission charge for this event, which is sponsored by Poetry magazine, and offers lots of free publications. There will also performances and readings.

Burlington Northern Kept A Rollin’. Braam’s Return, a sort of homecoming gig for the family-named band at The Dark Room on August 12th, is officially back on again. Braam, which includes brothers Scott, Tom, and Mike, and non-related new drummer, Mike Mattner, had temporarily canceled due to a scheduling conflict, but everything has since been ironed out. The group is promoting its new CD, Living Room, which features the single and video, “Burlington Northern.”

Beat On The Street. Congratulations to She-Nannigan’s, the long-time singles bar on Division Street, on 40 years of being in business. I still have fond memories of hanging out there, particularly on summer nights. Until I read Dave Hoekstra’s piece in the July 29th issue of the Chicago Sun-Times, I wasn’t aware that this venue had hosted performances by The Go-Go’s, Matthew Sweet, and Cracker.

ur blog is really very nice..i must say..