A Midsummer Night’s (All I Have To Do Is) Dream 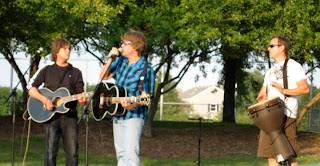 The Everly Hillbillies came to the suburb of Buffalo Grove tonight for an outdoor concert in a grassy field called Willow Stream Park. They didn’t have an official stage to perform on, so Mike Cohen and Jeff Janulis sang and strummed their acoustic guitars with trees as a backdrop, while Don Koss added percussion. Cohen and Janulis have performed for several years together as part of the power pop band The Abbeys, while Cohen and Koss play with the power pop band The Pop Dollys.

The Everly Hillbillies offer a lot of Phil and Don material, but not much in the way of bluegrass, which makes their name a bit of a mystery. Still, that doesn’t seem to matter when Cohen and Janulis harmonize on hits like “Wake Up Little Susie,” “All I Have To Do Is Dream,” “Bird Dog,” and “Bye Bye, Love.” The Everly Brothers wrote some of their own material, like “(‘Til) I Kissed You,” but Cohen frequently points out the numerous composers like Felice and Boudleaux Bryant, Carole King, and Paul McCartney, who helped the duo achieve stardom.

The easygoing, 90-minute concert also found The Everly Hillbilies covering Creedence Clearwater Revival, Nazareth (whose “Love Hurts” was a Bryant composition), Roy Orbison, and The Beatles. There were some obscure choices as well, like a vintage blues tune by Jimmy Reed, and Electric Light Orchestra’s “Story Of Me.” Cohen and Janulis were able to tap into their Everly Brothers influences on catchy originals like “Peace With The Past” and “Alone In My Room.”

The weather, which had looked threatening earlier in the day, proved to be perfect, and by the time The Everly Hillbillies wrapped things up with a trio of Little Richard tunes, the audience had enjoyed a pleasant night of acoustic entertainment.