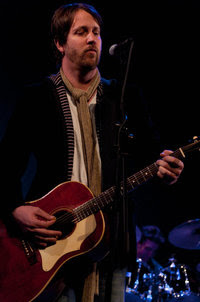 So what were you doing at noon today? If you wanted to give Ringo Starr, who is now 70 years old but looks and acts like he’s 40, the birthday present he specifically requested, you would have flashed the peace sign to those around you and declared, “Peace & Love!”

Those were the instructions from Ringo on his official website. He hopes that if we keep doing this every year, the world will become a better place. I wasn’t aware of his wish until hours later, and since I wasn’t out parading at noon, I couldn’t have participated anyway. But I can say peace and love to everyone through this blog post, and wish the very funny and talented Ringo the happiest of birthdays. He’s currently on tour.

It’s also Virginia-based power pop musician Todd Wright’s birthday today, and he has more to celebrate than just turning 40. Wright has wrapped up his ambitious 40x40 Project, a quest to release a free track download each week for 40 straight weeks, to help fund the search for a cure for Juvenile Diabetes.

His final song, the melodic acoustic ballad “What Am I Gonna Do Now,” featuring Brian Delaney on drums; Bryan Dawley on bass, guitar, and vocals; and Nate Ihara on vocals, is available for free, along with the 39 others, from his website. Visitors to the site are encouraged to make a donation to the American Diabetes Association. Limited edition packages of the songs and other special items are available for sale.

Along the way, several musicians have helped Wright out, including members of Taylor Swift’s band, Better Than Ezra, The New York Dolls, Collective Soul, and The Click Five. Wright’s seven-year old daughter also got involved by drawing a picture for each of her Dad’s 40 songs, as well as singing on some of them.

Wright will be performing a special Finale Show tonight, along with guest musicians from Jonasay, Brindley Brothers, Earth To Andy, Getaway Car, and Everything, at Jammin Java in Vienna, VA. The concert starts at 8:00PM and runs to 11:00 PM. Scott Simons will serve as the opening act, and then join Wright and the other musicians for the main event.

Happy Birthday to Todd Wright and congratulations on coming up with his amazing idea, and having the talent and determination to make it a reality. Have fun celebrating tonight, and as Ringo would say, “Peace and Love.”