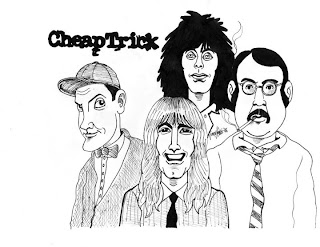 The High Priest & The Lady. First, Go-Go’s guitarist Jane Wiedlin was immortalized as Lady Robotika, and now Cheap Trick’s Robin Zander has ventured into the world of comics. He wrote and conceived High Priest Of Rhythmic Noise, which will be published by Ape Comics in the Fall. Zander made a special appearance at the Comic Con in San Diego on July 22nd, and signed copies of the graphic novel. Maybe he compared notes with Wiedlin, who was also at the event. It would be nice if they both came to Chicago for Wizard World.

Dot Dot Dot will hold a release party for its second CD at the 115 Bourbon Street club in Merrionette Park in Illinois on August 7th, at 11:00 PM. The first video from the Palatine-based band’s new effort will be for “Around The World (And Back).”

Your Villain My Hero has been chosen as the first band to be featured on Ty Bentli’s Going Viral web-based music series on KISS FM. The band, which has a steady gig on Thursdays at Durty Nellies in Palatine, played a live version of its original tune, “I Don’t Need A Boyfriend.” The video is tied into a contest for Chicago music acts, so fans should check out Your Villain My Hero online to see how they can participate.

Vicki Peterson of The Bangles has posted a thank you message on Facebook to all the fans who helped raise funds for keyboard player Harpo Hilfman’s wife, Cindi. Peterson reports that Harpo successfully donated a kidney to his wife, and both are doing well. Peterson is looking to bring in some more money by putting a dress she wore to the British Phonographic Industry Awards in 1987 up for auction on eBay. The Bangles will play a benefit concert for Cindi on July 30th in Topanga, California. Peterson is asking fans to keep their thoughts, prayers, and good vibrations coming.

The Beat Goes On. The Power Pop Overdose blog is reporting the good news that Paul Collins will release a new CD, title King Of Power on Alive Records this on August 24th.

Hey, hey, it’s Angotti. Singer-guitarist Phil Angotti and friends will be performing a tribute to The Monkees at The Viaduct Theatre on Western Avenue in Chicago on July 30th, starting at 9:30PM.

The Handcuffs will be playing at Taste of Lincoln Avenue tomorrow afternoon at 2:00 PM. Other acts at the two-day fest include Soul Asylum, The Freddy Jones Band, and Heavy Manners.

Doggone it, Abbie. Congratulations to my alma mater comedy group Famous In The Future for getting some long overdue props. The latest issue of Chicago Magazine has a piece on the upcoming Abbie Fest at Mary-Arrchie Theatre on August 20th - 22nd, and the writer gives a shout out to FIF founding member Frank Carr’s sketch writing abilities, and notes his comic inspiration. Turns out, Frank always wanted to be like Rob Petrie on The Dick Van Dyke Show.