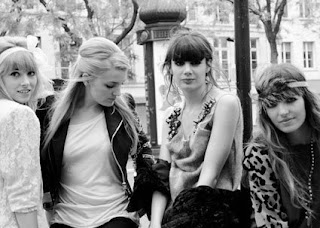 Like a lot of people these days, I don’t have enough money to see every concert I’d like to, particularly those held overseas. The Plastiscines are a four woman garage rock band from Paris who have released two fun CDs, LP1 and About Love.

They celebrated my birthday this past Sunday with an outdoor performance at the Paleo Festival Nyon in France. Okay, The Plastiscines weren’t aware that July 25th was my birthday but I would have liked to have gone anyway. Fortunately, I was able to watch the entire hour-long show on the band’s Facebook page. So what follows is my first review of a concert I saw only on the Internet.

As with Chicago, the weather in this particular area of France on July 25th was perfect. Kicking off with “I Could Rob You,” The Plastiscines charged through one high speed song after another, with minimal interaction with the audience, other than an occasional, “Merci!” It wasn’t until lead vocalist-guitarist Katty Besnard introduced the band’s first single, “Loser,” that she really spoke to the crowd.

When I saw The Plastiscines perform at an all ages event sponsored by Nylon Magazine at The Bottom Lounge last summer, they neglected LP1 in favor of the newer tunes from About Love. This more recent show featured material from both CDs, plus a cover of Joan Jett’s “I Love Rock ‘N’ Roll.” As with the CDs, some of the songs were sung in French, and some were in English. On a revved up cover of the Clint Ballard, Jr. penned Linda Ronstadt hit, “You’re No Good,” Besnard and guitarist Marine Neuilly traveled to opposite ends of the stage and cut loose with some extended jamming. The band also roughed up its own melodic single, “Barcelona,” with Zazie Tavitian violently attacking her drum kit.

“Shake (Twist Around The Fire)” featured a revved up Ramones style arrangement, while the punchy “Mr. Driver” borrowed from The Doors’ “Hello I Love You” (which borrowed heavily from The Kinks). On “Bitch,” Besnard ventured out into the crowd, while Neuilly was lying on her back, madly strumming her guitar. It was an appropriately wild finale to a hard-hitting concert. The Plastiscines would have been an inspired choice for Lilith Fair, especially if organizer Sarah McLachlan wanted to give her fest some additional international flavor.