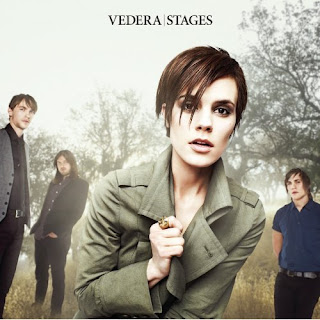 People heading out to Lilith Fair at the First Midwest Bank Amphitheatre tomorrow should be aware that there have been some recent changes to the line up. The acts now slated to perform are the event’s founder, Sarah McLachlan; Mary J. Blige; Heart; Court Yard Hounds; Kate Nash; Vedera (see above); Vita Chambers; Meaghan Smith; and Our Stage Winner Katie Todd.

Braam has added a new drummer and will be performing at The Darkroom on Chicago Avenue on August 12th at 9PM. The multi-brother band has a new CD, called Living Room, which includes the single “Burlington Northern.” The video for “Burlington Northern” is still in contention for a People’s Choice Award at the World Music and Independent Film Festival. Fans can cast their votes at the festival’s website.

First there was Walking with Dinosaurs The Arena Spectacular, and now there will be time traveling with alien monsters. At least that’s what it will feel like when Doctor Who Live brings Cybermen, Weeping Angels (don’t blink!), Smilers, Vampires, Clockwork Robots, and other fiends from the long-running sci-fi show to stages in nine English cities. The promoters promise, “special FX, optical illusions, and spectacular pyrotechnics building to an epic finale.” If BBC Worldwide is planning on bringing any events like this to the States, I think I’d feel more comfortable with the various companions who have helped the Doctor.

Ralph Covert and his teenage daughter Fiona Grey will perform Dinner & Music, an acoustic show at Julius Meinl on Southport Avenue in Chicago next Thursday at 7:00PM. Covert has a variety of sources to draw from, including his work with The Bad Examples and solo projects, as well as the music he’s composed for theater productions. It’s rumored that a few Ralph’s World compositions might turn up in the set.

Congratulations to Mary-Arrchie Theatre on its successful staging of Kirk Lynn’s challenging Cherrywood. Several of the shows in the opening weeks have sold out, and the play, directed by David Cromer, has been getting favorable reviews in the local press.

Marshall Crenshaw’s current tour will bring him to the Chicago area on October 27th, when he performs a show at SPACE in Evanston. He’ll also be part of Channeling Chilton: A Night of Alex Chilton’s Music, which will be held at City Winery in New York on July 28th. Members of Big Star will also be on hand for the tribute, as well as other special guests. Some of the proceeds will benefit people affected by the Deep Horizon Oil Spill.

Power pop the post office. Cheap Trick fans can now show their allegiance to the band on every card or letter they send through the mail. Real US postal stamps sporting the unforgettable Cheap Trick logo can be purchased from Zazzle. That’s the same company where fans of the Sunday Morning Coffee With Jeff Internet show can purchase mugs, buttons, and other souvenirs.

Anyone who was intrigued by the CD review posted here yesterday for Solid State by The Greenwoods should check out the band tomorrow night at Martyr’s on Chicago’s north side. The band’s CD release party starts at 9PM.

Pat Benatar will be signing copies of her book, Between a Heart and a Rock Place at the Borders store at 830 N. Michigan Avenue at 12:30 PM on Sunday.

WXRT radio personality Terri Hemmert is a candidate to be inducted into the National Radio Hall of Fame. Fans can help her achieve this well-deserved honor by voting via a link on the station’s website.