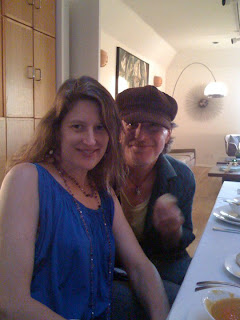 As Pitchfork Music Festival and Lilith Fair prepare to lock horns in the Chicago area this Saturday, James Moeller and Carla Hayden of Black Forest Theatre are spreading the word about their first ever BlackforestPalooozzzaaa, which takes place on the same day. Kicking off at noon, it’s a free, DIY multi-media event spread across a few locations in Evanston.

“We have a little storefront space in Evanston and we’re trying to create a local scene by inviting in a bunch of cool acts to perform,” Moeller said of BlackforestPalooozzzaaa in a recent e-mail. “It’s a party, a scene, a happening where everyone is welcome!”

The fun includes music, comedy, and meditation, as well as a BYOB and BYOM (Bring Your Own Meat) backyard barbecue at 746 Hinman. I’m assuming it’s BYOVS (Bring Your Own Vegetarian Substitute) as well. Attendees can get a free acupuncture treatment at the nearby Acupuncture Access if they mention “BlackforestPalooozzzaaa.” Call for an appointment at 847-312-1797 or just drop by 915 Elmwood between noon and 3:00 PM.

Surprisingly, Black Forest itself won’t be offering one of its charmingly offbeat theatrical productions at the fest. But the multi-faceted Moeller and Hayden will be on stage performing a half hour set with their alternative band WhiteWolfSonicPrincess at 9:30 PM. Moeller is also a guitarist-singer with the garage rock band The Telepaths, who’ll perform at 5:00PM.

Famous In The Future, a comedy group I performed with for 2000 years, will be offering a musical set at 8:40 PM. Dave Drazin, a former FIF member who has since become a highly respected silent film photoplay pianist (see Elevated Observations column), will be reuniting with the group for this set.

“We're performing four songs with Dave on piano, two newer and two older,” founding member Frank Carr explained in an e-mail. The two older tunes, “Mr. Beauvais” and “Stop That Guy,” are Drazin compositions; Carr and cast member Desiree Burcum each wrote one of the other two.

Famous In The Future and Black Forest are veterans of the annual Abbie Hoffman Died For Sins festival, which has been held at the Mary-Arrchie Theatre for over 20 years. Hopefully, BlackforestPalooozzzaaa will capture that same creative and cooperative spirit that the Abbie exudes.

“We hope to fill up the space with positive vibes and coolness,” Moeller said of the living room ambience of the Black Forest HQ. Or as the BlackforestPalooozzzaaa poster states, “Unchain your heart. Open your head. Energy is Eternal Delight!”